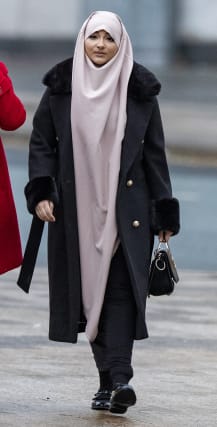 The former girlfriend of a professional footballer has been jailed for 18 months after being found guilty of fundraising for terrorism.

Amaani Noor, 21, who had planned to join her Islamist fighter husband in Syria, and mother-of-two Victoria Webster, 28, were sentenced at Liverpool Crown Court on Friday.

Noor, of Cinema Drive in Wavertree, Liverpool, had claimed she believed 45 dollars, around £35, she donated to the Merciful Hands organisation on May 23 last year would go to buy food for women and children in Syria.

But earlier this month a jury found her guilty of fundraising contrary to the Terrorism Act 2000.

Serena Gates, prosecuting, said Webster donated a total of about £45 in a series of small amounts.

Both women were in tears as they were told they would be jailed.

Sentencing Noor, honorary recorder of Liverpool Judge Andrew Menary QC rejected the claim that the former performing arts student had set up a PayPal account in a fake name because of “considerations of modesty”.

He said: “I don’t accept simply that you are that modest or naive in the way you would like people to believe.

“I have no doubt your commitment to your religion is entirely genuine but sadly there is a cunning about you which you maintained during your evidence.”

During the trial, the jury heard Noor, a former Miss Teen GB semi-finalist, and Webster messaged using the Telegram app and spoke about extremist groups including so-called Islamic State (IS).

They had access to video footage showing torture, beheadings and people being set on fire which the judge described as “truly shocking”.

Noor, who wore a black hijab, also used the app to message a man named Hakim My Love who, she told the court, she had married over videolink and who described himself as an independent fighter in Syria.

On the day officers searched her house, in July 2018, she had a ticket booked to travel to Turkey.

The court was read emails found on a phone seized by police, believed to be written by Noor to Hakim, which said: “It’s been my dream to marry a fighter for a long time and my dream to be a fighter myself even longer lol.”

The jury was told Noor had been in a relationship with a professional footballer when she was a teenager and also had a short marriage to a preacher.

David Gottlieb, defending, suggested her failed relationships may have led to the offences and “sent her spinning out of the solar system”.

He said she was in a new relationship and her fiance was in court along with her brother and mother.

Mr Gottlieb said: “She needs to address issues of self-esteem and making relationships.”

Hossein Zahir, defending Webster, who wore a pink niqab, said she was “on a path to reform”.

He added: “The ideology she thought she believed in has left her life in ruins.”

He said she was influenced by Kamran Awan, who was connected to the Merciful Hands, and had been “cynically used” by him.