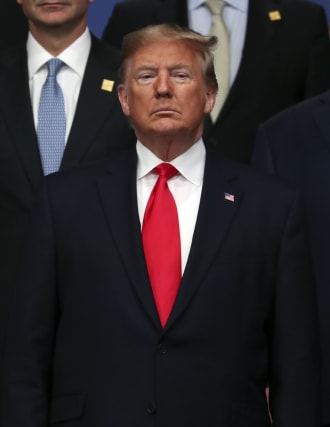 The impeachment of a US president should be the kind of news that sends markets into a panic.

But Donald Trump is no ordinary president, so, most traders simply shrugged and carried on, focusing instead on the hopes for next year that the US-China trade deal will come good.

Joshua Mahony, senior market analyst at IG, said: “Stock markets are primarily in the green, as tentative optimism continues to help drive equities higher in response to recent breakthroughs in the UK and US.

“Comments from Steve Mnuchin point towards the US-China deal being signed in early-January, ensuring that we should have a key driver of market gains play out throughout the festive period.”

“Now that the dust has settled from the UK general election, and the US-China trade deal, dealers don’t know which way to look.

“Between now and Christmas there isn’t much on the horizon in terms of macroeconomic news, so it is possible that equity benchmarks will continue to trade sideways.”

The pound continued to sink against the dollar since Prime Minister Boris Johnson said legislation would be passed to block any future extensions to the transition period after Brexit.

In company news, the battle for the future of Just Eat ramped up as suitors from Takeaway.com and Prosus both upped their bids for the online takeaway platform. Shares in Just Eat closed up 10p, or 1.25% at 812.6p.

Several retailers saw a boost in their share price following the Queen’s Speech where the Government confirmed they would introduce reforms to business rates.

Royal Bank of Scotland announced two top bosses of its investment banking arm would step down amid a shake-up of the struggling division.

RBS said NatWest Markets chief executive Chris Marks and chief financial officer Richard Place have quit, but will stay on to ensure an “orderly transition” until June and March next year respectively. Shares closed down 0.5% or 1.3p at 247.4p.

PayPoint also announced executive changes, with chief executive Patrick Headon stepping down from the business with immediate effect due to illness.

The company said Nick Wiles, its chairman, will continue to serve as executive chairman until a replacement is appointed. Shares closed up 4p at 1,012p.