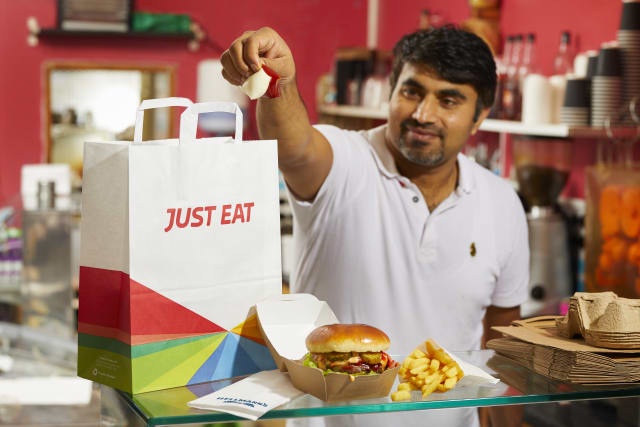 The Dutch delivery firm trying to buy Just Eat has sweetened its bid, minutes after a rival suitor upped its own offer for the British firm.

Takeaway.com, which had already agreed a merger deal with Just Eat, made an improved merger offer which it said valued the company at 916p per share based on Wednesday’s closing price.

Takeaway said the offer will be its “final” bid for the food delivery firm and is an increase from its previous 731p offer.

The increased offer came shortly after Prosus, which has vied against the food delivery firm in the takeover battle for months, increased its own offer to 800p per share.

Just Eat shareholders will own 57.5% of the combined group as part of the bid, Takeaway said, up from 52.12% under its previous offer.

It added that the offer will remain open for acceptances until January 10 and said that a majority vote is needed for the deal to be accepted.

Takeaway also said it will, following the completion of a merger, sell Just Eat’s stake in iFood, returning 50% of the proceeds to the shareholders of the new business.

Jitse Groen, Takeaway chief executive, said: “This offer is a full offer, and on top of that we believe it provides Just Eat shareholders with tremendous upside.

“The all-share combination establishes the largest global platform in online food delivery outside China and allows shareholders of both Just Eat and Takeaway.com to benefit from significant long-term value creation.”

Prosus, which spun off from South Africa’s Naspers earlier this year, said that its new 800p share offer would provide “outstanding” value for Just Eat’s owners.

It is the third time that Prosus increased its offer since first trying to muscle in on the deal between Just Eat and Takeaway.com.

“Following extensive discussions with Just Eat’s and Prosus’s shareholders, we have decided to make a final increase in our cash offer to 800p per share,” said Prosus chief executive Bob van Dijk.

“This level delivers outstanding and certain value to Just Eat shareholders while also providing an appropriate return for our own shareholders, given strong levels of competition and significant investment required to reinvigorate growth. We urge Just Eat shareholders to accept this final offer and bring the uncertainty around Just Eat’s future to a close.”