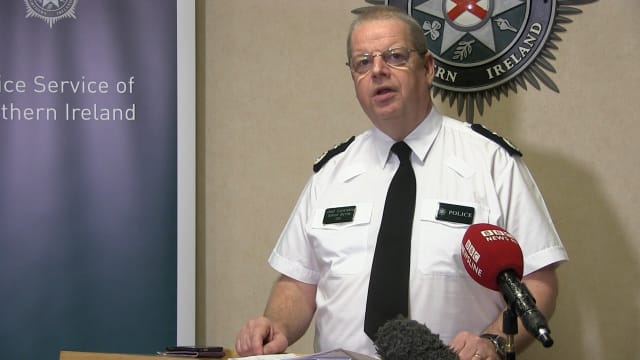 Police are gearing up for Brexit-related protests at ports in Northern Ireland.

Under Prime Minister Boris Johnson’s Brexit plan, extra customs regulations could be imposed on goods travelling between Great Britain and Northern Ireland to safeguard the Irish land border with the EU.

Unionists are adamantly opposed to what they term a border in the Irish Sea.

Mr Byrne said: “It is about turning the lens from the border to the ports, so we will be asking for people.”

He added: “There is a continuing threat from dissident republicans but also potentially for ports … if the arrangements are seen to be adverse to Northern Ireland.”

Mutual aid provisions allow other forces around the UK to augment PSNI numbers if necessary and Mr Byrne said they are looking at the supply of body armour.

He said: “We need more officers on the front line.”

Northern Ireland has major ports in Larne in Co Antrim and Belfast, serving traffic from Scotland and north-west England.

The DUP is opposed to Mr Johnson’s Brexit plan, accusing him of facilitating an economic united Ireland.

Policymakers are juggling the need to prevent a hard border on the currently frictionless frontier between Northern Ireland and the Republic with unionist concerns about preserving the integrity of the UK.

Extra officers have already been allocated to controlling the Irish border.

“We are giving it a daily dust-down to make sure we are ready for whatever comes our way.”

Addressing a meeting of the Policing Board in Belfast, which scrutinises his force, he said: “Given where we are, I am as confident as I can be.”

He is bidding for extra officers to augment the 300 already granted.