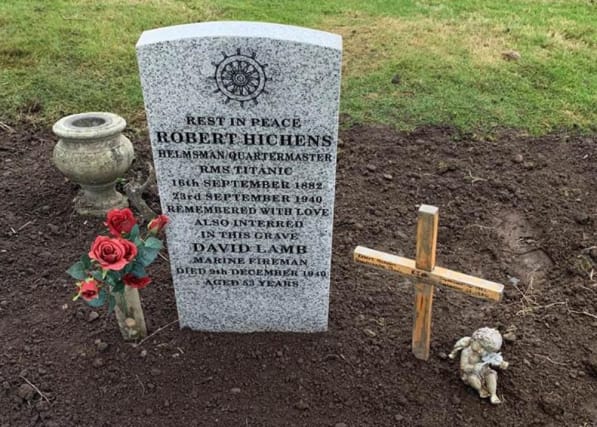 The family of the helmsman of the Titanic, whose final resting place was a mystery for decades, have now marked his grave with a headstone in Aberdeen.

Robert Hichens was at the wheel on the night the liner sank but made it to safety in a lifeboat with passengers.

He became embroiled in controversy regarding his role in the tragedy and suffered from mental health problems, turning to drink, serving a jail term for attempted murder and trying to take his own life.

He later served on cargo ships during the Second World War and was found dead in his bunk in 1940 when moored off Aberdeen.

Mr Hichens was buried in an unmarked grave with another sailor – Dutch seaman David Lamb – in Trinity Cemetery, meaning for years his family did not know where he had been laid to rest.

His great-granddaughter, Sally Nilsson, from Reigate, Surrey, found out in 2012, weeks before the centenary of the sinking, with the help of Ian Burnett, Aberdeen City Council bereavement services officer.

At the time, she marked his grave with a wooden cross but now a headstone has been unveiled inscribed with the message that Mr Hichens was a helmsman and quartermaster on the Titanic and is “remembered with love”.

The memorial was erected in a ceremony attended by three other relatives as well as Titanic enthusiasts.

Ms Nilsson said: “It’s amazing, it is just fantastic. There were loads of people there.

“He deserves the recognition and I’m really happy to have been part of it.

“I want everybody to know the story of Robert Hichens. He is a very important person in history.”

Mr Burnett said: “It’s been an honour to help Sally and her family find the grave of her great-grandfather and help provide a lasting memorial at the actual place where he was buried with the help of colleagues in the Commonwealth War Graves Commission.”