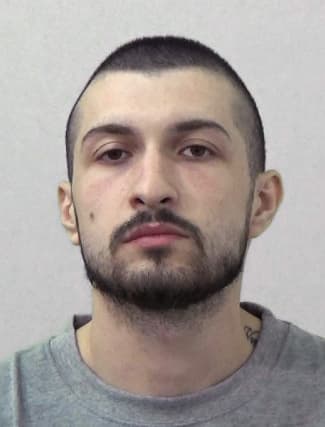 A jealous man jailed for life for murdering his three-week-old son had previously warned his partner “if I cannot be a good father to him he will not live”, a court has heard.

Denis Beytula must serve a minimum of 23 years before parole will be considered after he stabbed his son Andrei twice in his Moses basket in October.

He then knifed his partner Andreea Stefan six times in their flat in Portland Close, Wallsend, North Tyneside, but she survived.

Judge Paul Sloan QC sentenced Beytula to life for murder and attempted murder, telling him: “The victim, your newborn son, was particularly vulnerable. The attack occurred in Andrei’s own home, which should have provided a place of sanctuary.”

Beytula, 27, rang 999 after the attack and when the arresting officer asked why he had blood on him, the fast food worker replied in a matter-of-fact tone: “I killed them.”

In fact, Ms Stefan, the 21-year-old manager of a Domino’s pizza outlet, survived and said she had been under her partner’s control when she and her baby should have been safe.

Beytula, who came to the UK from Bulgaria around seven years ago, was sexually demanding, intensely jealous of her friendships and tried to control all aspects of her life, Newcastle Crown Court heard.

He tried to get a job at her pizza shop and stopped her from attending a Domino’s awards ceremony in London, and her friends described him as a “control freak”.

Nick Dry, prosecuting, said Beytula became worse during Ms Stefan’s pregnancy and once ominously warned her about his unborn son: “If I cannot be a good father to him, he will not live. I gave him life and I will take life.”

Beytula did not form a bond with Andrei, became incensed when the newborn woke him up, and was jealous of the attention Ms Stefan gave him.

The night before the murder, he threatened to kill his Romanian partner after his sexual advances were not welcome.

He used the same knife the next day to stab Andrei after sending Ms Stefan out of the bedroom.

The baby died days later in hospital despite the efforts of the first police officer on the scene and medical teams at the Royal Victoria Infirmary.

The court heard Ms Stefan was lucky to survive six stab wounds and was making a strong physical recovery and was undergoing psychological treatment.

Outside court, Detective Inspector Graeme Dodds said Beytula was the worst offender he had dealt with in 20 years, adding: “He saw him not as a son, in a loving fatherly way – he saw him as a rival for Andreea’s affections.”

Police and social services were unaware of any concerns about Beytula as no complaints had been made about his behaviour.

Outside court, Ms Stefan added: “I have spent every second of my life since that day looking for reasons that could have made the outcome different.

“I have blamed myself for not breaking up with Denis earlier but only those who have been in a controlling relationship will understand why I stayed.

“He made me feel like I could not find anyone better and that nobody else could be a father to our son. He manipulated me and said everything he did was for love.”

Richard Fisher QC, defending, said Beytula had a troubled childhood with an ill mother and an absent father, he was remorseful and had a mild mental illness at the time of the murder, which was not premeditated.