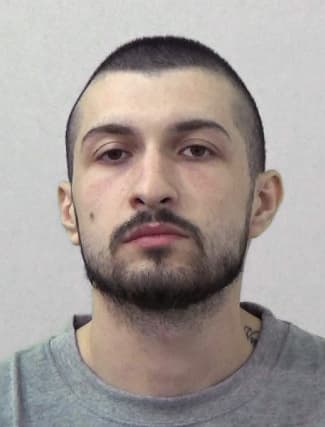 A jealous father who murdered his three-week-old son because he saw the baby as a rival for his partner’s affections has been jailed for life with a minimum term of 23 years.

He rang 999 and when the arresting officer asked why he had blood on him, the fast food worker replied in a matter-of-fact tone: “I killed them.”

In fact, Ms Stefan, the 21-year-old manager of a Domino’s pizza outlet, survived despite her injuries and released a statement to say how she had been under her partner’s control when she and her baby should have been safe.

Beytula, who came to this country from Bulgaria around seven years ago, was sentenced for the October murder and attempted murder at Newcastle Crown Court on Thursday.

The couple met at the end of 2018 and Andrei was born in September.

Beytula controlled his partner, making her feel insecure and stopping her from having friendships outside the home, the court heard.

He tried to get a job at her place of work and stopped her from attending a Domino’s awards ceremony in London.

His controlling influence got worse after Andrei was born, and a detective who worked on the case said Beytula grew jealous of the attention she needed to show to the newborn.

Detective Inspector Graeme Dodds said: “He saw him not as a son, in a loving fatherly way, he saw him as a rival for Andreea’s affections.

“Because of that jealousy and selfishness he killed Andrei and tried to kill Andreea.”

Police and social services were unaware of any concerns about Beytula, as no complaints had been made about his behaviour.

“But in one moment Denis shattered my whole world. In that one moment my heart was broken and my worst nightmare came true.”

She added: “I have spent every second of my life since that day looking for reasons that could have made the outcome different.

“I have blamed myself for not breaking up with Denis earlier but only those who have been in a controlling relationship will understand why I stayed.

“He made me feel like I could not find anyone better and that nobody else could be a father to our son. He manipulated me and said everything he did was for love.