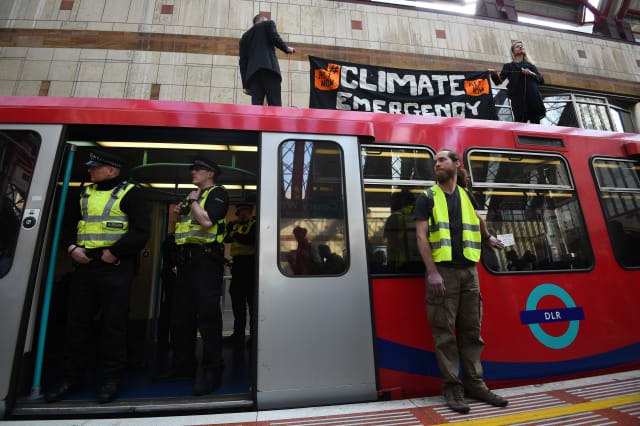 Three Extinction Rebellion protesters who glued themselves to a train have been spared jail.

Cathy Eastburn, 52, Mark Ovland, 36, and Luke Watson, 30, were each given a 12-month conditional discharge for halting Docklands Light Railway services at Canary Wharf station in east London, as part of a series of protests carried out across London.

The trio had denied the charges of obstructing an engine or a carriage using a railway on April 17 this year, claiming the stunt was justified because of the threat of climate change.

It is the first trial linked to the environmental demonstrations to be dealt with by a crown court which has higher sentencing powers than a magistrates’ court where many other protesters have been dealt with, Extinction Rebellion (XR) have claimed.

Sentencing them at Inner London Crown Court on Thursday, Judge Silas Reid said that each of the defendants were “clear that you did as you did to raise the alarm of the dire situation” but warned against protesting that would amount to them committing further criminal offences.

“Each of you planned these offences and were prepared to go to prison for committing them,” he said.

The trio had maintained that their actions were not criminal, but Judge Reid said: “You broke the law and that means you are criminals.

“What’s clear is that the rule of law is an essential part of society. It protects us all from anarchy and chaos.”

He told the defendants that he was concerned, with particular reference to Eastburn and Ovland, that they “may in fact decide to break the law again in the future for your cause”, as the court heard that both defendants had been involved in other action carried out by XR throughout the year.

The sentence means the trio could face prison if they commit another offence in the next 12 months.

Judge Reid added he was unable to give credit for a guilty plea or remorse, but acknowledged that the trio had already spent time in custody on remand, which was eight days for Eastburn, 13 days for Watson and 53 for Ovland.

After one hour of deliberations, a jury unanimously found the defendants guilty on Wednesday, but the foreman added it was “with regret”.

Watson, of The Street in Manuden, Essex, and Eastburn, of St Gerrards Close, Lambeth, both climbed on top of the train carriage and glued themselves to the roof, while Ovland, of High Street in Keinton Mandeville, Somerset, glued his hands to the side.

The trio were arrested during two weeks of demonstrations organised by XR which brought parts of the capital to a standstill.