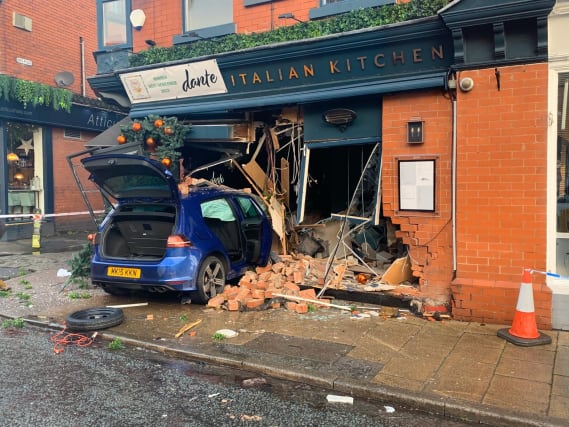 A car was left embedded in the front of a restaurant after a police pursuit of a stolen vehicle.

The blue VW Golf crashed into the Dante Italian Kitchen restaurant in the early hours of this morning in the upmarket Cheshire village of Hale.

The front of the award-winning restaurant was demolished with the car left surrounded by bricks and debris.

Four men have been arrested, all of whom suffered minor injuries.

Police were alerted after a report that a vehicle had been stolen at around 2.20am on Thursday.

It is understood a pursuit took place and officers spotted the VW Golf, described as a “tandem car” which drove off from police and crashed into the restaurant.

The four men arrested were detained at the scene on Ashley Road.

Launched in June 2018, boasting “stunning interior design” and authentic cuisine, the restaurant had won the Best Newcomer title in the Italian Awards 2019 and were taking bookings from diners for Christmas Day and New Year’s Eve.

Calls to the restaurant were not answered on Thursday.