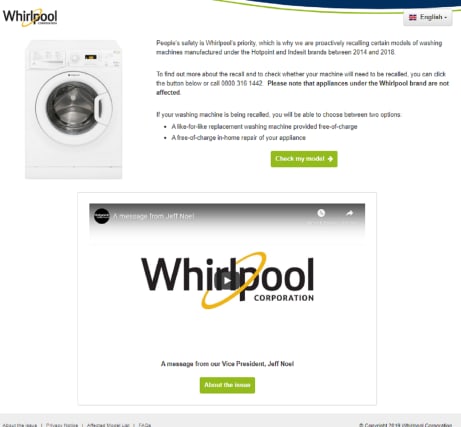 Concerned owners of Hotpoint and Indesit washing machines are still struggling to access a recall website to check if their machine is a fire risk.

Parent company Whirlpool announced on Tuesday that it is recalling 519,000 washing machines over a flaw with the door locking system that can cause the appliances to overheat and potentially catch fire.

But a website and helpline set up to allow customers to check if their machine is one of the models were promptly overwhelmed, with problems continuing on Wednesday.

A Whirlpool spokesman said: “We are truly sorry for the technical issues customers have been experiencing on our website. One of our third-party service providers suffered an issue which affected our recall website.

“We’ve been working with them through the night, and have built a new online system to fix this. The system is being tested, so the website is still suspended for the time being, but is due to be up and running shortly.”

A phone line has also been set up on 0800 316 1442, although some customers have reported difficulties with using this too.

The company had taken 17,000 calls on Wednesday morning.

Adam French, consumer rights spokesman at Which?, said: “Millions of people who have just learned they may have a fire-risk washing machine in their home will understandably be worried and frustrated that they can’t check if their Hotpoint or Indesit machine could be affected.

“Whirlpool needs to urgently work to get the site and phone line back up and running and clarify the advice they are currently giving to customers with an affected machine.

“We also want Whirlpool to offer refunds to the many customers who cannot wait months for a repair or replacement, or who simply may not want a machine from the tainted Whirlpool brand in their homes.”

Whirlpool said it was working at “full speed” as it prepares to officially begin the recall in early January.

Those who chose to continue using their machines should only use cold water cycles of 20C or lower as this significantly reduces the risk, Whirlpool said.

This is because the issue is associated with the washing machine’s heating element being activated during washing cycles above 20C.