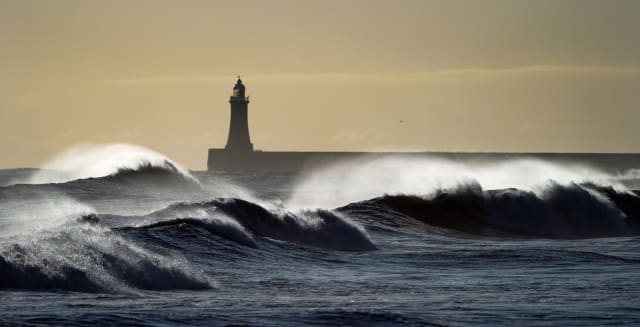 Unsettled weather is expected to hit parts of the UK over the next 24 hours, with winds of up to 70mph and heavy rain leading to a risk of flooding.

A number of weather warnings are in place on Wednesday and forecasters are predicting that rain at the end of the week could affect a large part of southern England.

And while it is too early to predict the weather for Christmas Day, temperatures are expected to be milder than they have been so far this week.

Ice and fog warnings issued by the Met Office are expected to expire by Wednesday afternoon but fog could remain in some areas, including Lincolnshire and the Vale of York.

But yellow warnings for rain and wind will remain until the early hours of Thursday morning.

Bonnie Diamond, a meteorologist with the Met Office, said: “There’s an area of low pressure in the Atlantic that’s pushing in from Ireland eastwards later today and that’s going to bring strong winds and coastal gales to south west England and Wales, the winds turning increasingly strong through later today and also heavy rain. So there’s quite a few warnings in place at the moment.”

Ms Diamond said the winds will strengthen on Wednesday afternoon and will be strongest across Northern Ireland, western Wales and south west England.

Gusts could reach 60-70mph in coastal areas and high ground, while inland, gales will be around 45-50mph.

Heavy rain will affect the same areas before pushing eastwards across the rest of the UK.

Ms Diamond said: “So really quite an unsettled 24 hours ahead with the main impact being felt across western parts of the country in terms of rain and strong winds.”

Rain warnings are currently in place in parts of southern England on Friday and Saturday, and Ms Diamond said it is likely these warnings will increase in area.

She said: “It looks like quite a broad area of southern England is likely to get quite a lot of wet weather over the next couple of days and there could be local impact in terms of flooding with that amount of rain over consecutive days.”

Meanwhile, the Environment Agency has 10 flood warnings in place on Wednesday, in areas of Lincolnshire and west and south-west England.

Ms Diamond said it is too early to predict the weather for Christmas Day but temperatures are expected to reach up to 11C in some places over the weekend.

She said: “Into the weekend, things are going to settle down a little bit, compared to the heavy rain and strong winds, with some signs that drier, quieter weather might become established around Christmas Day.”