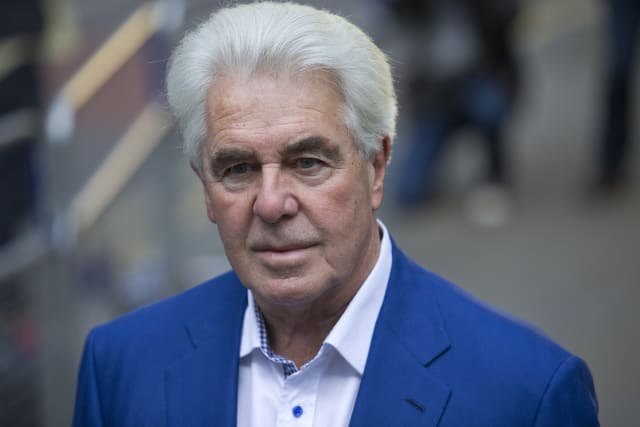 Disgraced celebrity publicist Max Clifford could have received better care in his dying months if the condition causing his heart failure was diagnosed sooner, an inquest has heard.

Clifford, 74, collapsed in the shower at Littlehey Prison in Cambridgeshire, where he was serving an eight-year sentence for historical sex offences.

He was admitted to Hinchingbrooke Hospital near Huntingdon where he died two days later on December 10 2017.

Clifford had complained of shortness of breath to a prison GP in July 2017, began treatment for presumed heart failure and an ultrasound of his heart was taken in September 2017.

Simon Milburn, assistant coroner for Cambridgeshire, said that if this ultrasound was referred from a general cardiologist at Hinchingbrooke to a specialist for a second opinion it “probably” would have led to a diagnosis of cardiac AL amyloidosis.

A second opinion was not sought and a diagnosis of the rare, serious condition – which is caused by a build-up of abnormal proteins in organs and tissues – was not established until the days before Clifford’s death.

Mr Milburn said that an earlier diagnosis would not have prolonged Clifford’s life but “would have given the opportunity for those responsible for his care to optimise his treatment, relieve his symptoms and discuss further care with him”.

The coroner said that the cardiologists involved in Clifford’s care made clinical decisions “based on the evidence and symptoms (they) saw at the time”.

He concluded following a three-day hearing that Clifford died of natural causes.

A post-mortem examination recorded Clifford’s cause of death as congestive heart failure.

Further underlying factors were given as cardiac AL amyloidosis and plasma cell neoplasm, diseases in which the body makes too many plasma cells.

Clifford’s daughter Louise Clifford attended Wednesday’s hearing in Peterborough and stood beside her solicitor Neil Cronin as he read a statement from the family outside court.

“On September 12 2017, it was clear that a second opinion should have been sought and this would have led to improved treatment and comfort and allowed Max to make arrangements for the last few months of his life,” he said.

“This was taken away from him.

“The family were pleased to hear that the Ministry of Justice announced today at the end of the evidence that a £10 million package of funding for HMP Littlehey was to be put in place to tackle the chronic problems and negative impact on living conditions caused by the heating and boiler systems.”

Professor Jonathan Townend, consultant cardiologist at Queen Elizabeth Hospital in Birmingham, was asked by the coroner to review the cardiac care received by Clifford.

He told the inquest that an earlier diagnosis could have spared Clifford from enduring three resuscitation attempts in hospital, adding: “It’s a pointless process trying to resuscitate someone who’s dying of an untreatable disease.”

Clifford had complained of “ice-cold” prison showers, his daughter said.

Prof Townend said cold showers would have been an “uncomfortable episode” but said that this would not have affected the progression of Clifford’s disease.