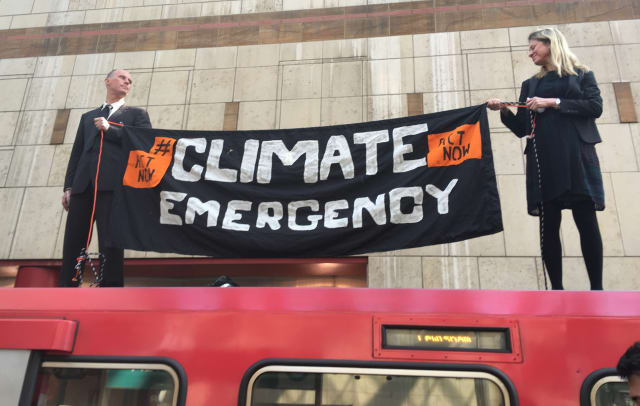 Three Extinction Rebellion protesters who glued themselves to a train have been found guilty “with regret” by a jury in the first crown court trial linked to the environmental demonstrations.

The trio denied the charges of obstructing a railway on Wednesday April 17, claiming the stunt was justified because of the threat of climate change.

Watson, of The Street in Manuden, Essex, and Eastburn, of St Gerrards Close, Lambeth, both climbed on top of the train carriage and glued their hands to the roof, while Ovland, of High Street in Keinton Mandeville, Somerset, glued his hands to the side.

After one hour of deliberations, the jury unanimously found the defendants guilty on Wednesday, but the foreman added it was “with regret”.

Extinction Rebellion (XR), an activist group whose protesters are urging government action on climate change, claims the trial was the first to be dealt with by a crown court as opposed to a magistrates’ Court.

The trio were released on unconditional bail and will be sentenced by Judge Silas Reid at the same court on Thursday.

They were arrested during two weeks of demonstrations organised by XR which brought parts of London to a standstill.