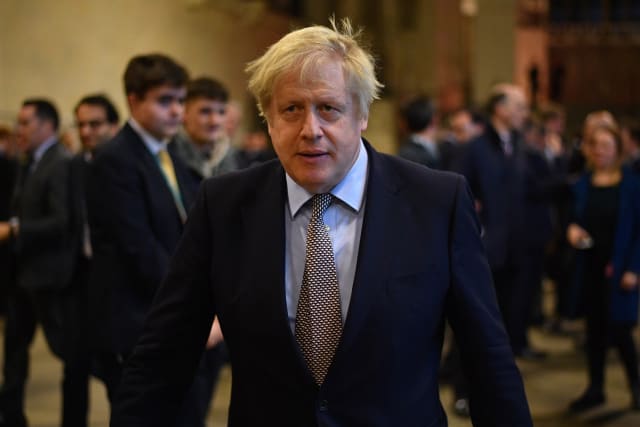 Boris Johnson has warned Conservative MPs that voters expect them to work hard to get his Brexit deal through the Commons to enable the UK to leave the European Union next month.

The Prime Minister – addressing the 1922 Committee of Tory MPs for the first time since the election – was said to have told them they have a lot of work to do.

Mr Johnson was greeted with table-banging, and one MP described the atmosphere inside the room as “euphoric” following the party’s victory last week.

Conservative former minister Robert Halfon told the PA news agency that the PM gave a “great speech”, adding: “He said we’ve got a lot of work to do. The voters, they’ve lent us their vote and we need to prove to the people that we can keep our pledges and promises.

“It’s in getting Brexit sorted in the next few weeks, but that we’ve got a lot of work to do – there’s not a moment to lose.

“And that you can’t rest on your laurels at all, he said, there’s no way, there’s a lot we’ve got to do for the country. We’re going to have quite a busy week when we come back from all accounts.

“And rightly so because there’s no such thing as a honeymoon in politics. I think people will give us a Christmas break but they expect us to get on with it.”

Another MP said Mr Johnson had thanked those elected for their hard work, and said the party would begin its efforts to get Brexit done this Friday.

The Government is hoping to ask the Commons to vote on the Government’s Withdrawal Agreement Bill on Friday – kick-starting the legislation’s parliamentary process to enable the UK to leave on January 31 with a deal.

His comments came after Downing Street confirmed that the Government would legislate to give British judges new powers to overturn rulings of the European Court of Justice (ECJ) after Brexit,

Elsewhere, Matt Hancock confirmed that all student nurses would be eligible for bursaries worth at least £5,000 per year under Government plans to restore the grants after they were scrapped under the Tories’ austerity measures.

The Health Secretary announced that the Conservatives’ manifesto commitment would be rolled out from September, in a bid to woo those currently considering a nursing degree ahead of the application deadline.

Annual payments of £5,000 will be available to all student nurses – as well as some allied health professionals – from the start of the next academic year, with a further £3,000 for specialist disciplines, such as mental health, which are hard to recruit.

Mr Hancock, speaking at the Policy Exchange think tank in Westminster, said he hoped the £2 billion package of financial support would attract more nurses into the profession and reward those choosing nursing as a career.

“We’re going to give student nurses a free, non-repayable training grant worth up to £8,000 a year on top of the existing funding available – almost doubling the financial support on offer,” he said.

“Every student nurse will receive at least £5,000 extra a year from next September, with more financial support for childcare costs, for instance, or in regions, or disciplines, such mental health, where the need for nurses is more acute.

“At the same time, we’re going to expand further the roots into nursing with more nursing associates and apprentices. I want to make it easy to climb the ladder to become a fully registered nurse.”