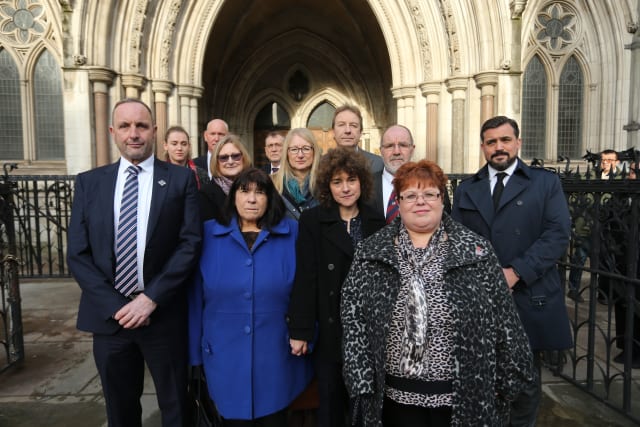 The families of the Hyde Park bombing victims have urged the Government to meet them after a High Court judge ruled that John Downey was involved in the IRA attack.

Relatives of the four Household Cavalrymen who died in the July 1982 blast launched legal action against the convicted IRA member after a criminal case collapsed at the Old Bailey in 2014.

Lawyers representing Sarahjane Young, whose father, Lance Corporal Jeffrey Young, was one of those killed and who brought the civil case against Downey, said justice had finally prevailed.

Her solicitor, Matthew Jury, said in a statement after the ruling on Wednesday that the victims’ relatives invite the Government to meet them to “ensure it never fails them or other victims or veterans again”.

Speaking outside the Royal Courts of Justice in London, Mr Jury said: “Sarahjane Young was made a victim three times over.

“The first time by the IRA and John Downey when they detonated the bomb that killed her father.

“The second when a ‘catastrophic failure’ by the British government led to Downey being issued an ‘on-the-run-letter’.

“The third when Downey’s criminal trial collapsed as a result.

“Sarahjane, and the families here today, were told they’d never get justice, that they should put the past behind them and move on.

“They, and thousands whose lives were devastated by the IRA, are the forgotten victims.

“Yesterday, many responsible for the most awful acts of terrorism on British soil were living out their days in peaceful retirement, believing they would never be held to account for their crimes. But justice has prevailed.”

“Sarahjane and the brave families gathered here wish to tell them that, no matter how many years have passed, justice can and will and must be done.

“And they invite the British Government to meet with them to ensure it never fails them or other victims or veterans again.”

Mrs Justice Yip ruled that Downey was an “active participant” in the bombing and was jointly responsible with other IRA members for the attack, in which 31 other people were injured.

Announcing her conclusions, the judge said: “This was a deliberate, carefully planned attack on members of the military.

“I have found that the defendant was an active participant in the concerted plan to detonate the bomb, with the intent to kill or at least to cause serious harm to members of the Household Cavalry.”

L/Cpl Young was 19 when he was killed, along with Squadron Quartermaster Corporal Roy Bright, 36, Lieutenant Dennis Daly, 23, and Trooper Simon Tipper, also 19, as they rode through the central London park from their barracks to attend Changing the Guard at Buckingham Palace.

Ms Young, who has suffered psychiatric harm as a result of the bombing that killed her father, was just four years old at the time and in nursery at the barracks when she saw wounded soldiers returning.

The criminal case against him dramatically collapsed after it was revealed that he had received a written assurance from former prime minister Tony Blair’s government – under the terms of the controversial “On The Runs” scheme – that he was no longer wanted.

Trial judge Mr Justice Sweeney ruled that Downey’s arrest at Gatwick Airport, as he passed through the UK on the way to a holiday in 2013, represented an abuse of process and he put a stay on any future prosecution.

Mrs Justice Yip said Downey should not have received the assurance, but did so because of a “catastrophic failure” and therefore believed he could travel freely to the UK without facing prosecution.

She said the civil case against him could go ahead, despite being brought so many years after the atrocity and therefore after the normal legal deadline.

The judge said if the case had not proceeded because of that technicality, Downey would have avoided the court’s determination on the evidence, having already avoided a criminal trial due to “an error on the part of the state”.

The civil action against Downey was brought after the collapse of the criminal trial.

The relatives initially asked for help with legal fees through crowdfunding after being refused legal aid five times, but it was revealed in February last year that they had been granted public funding to pursue the case.

Downey is currently in prison in Northern Ireland, facing a criminal prosecution for a car bomb attack which killed Ulster Defence Regiment members Alfred Johnston and James Eames in Enniskillen, Co Fermanagh, in 1972.

No date was set for the second stage of the case, which will determine the amount of damages to be awarded.