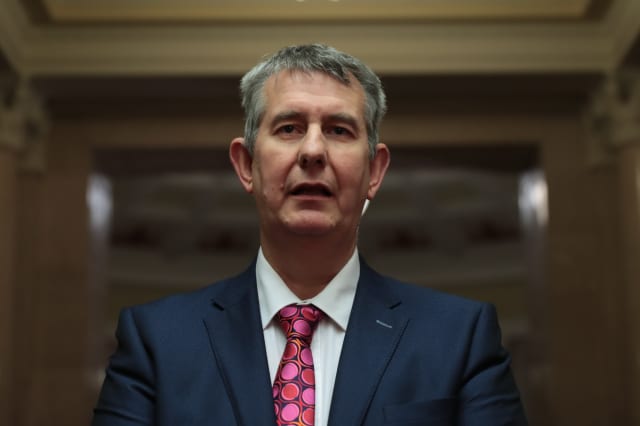 Differences between the political parties in Northern Ireland are marginal, a senior Democratic Unionist said.

Edwin Poots claimed there was good spirit and a desire to restore the devolved Assembly at Stormont straight away.

The powersharing institutions have been in deep freeze for nearly three years following a fallout between former coalition partners Sinn Fein and the DUP over a flawed renewable heat scheme.

Mr Poots said: “The differences are on the margins, the key issues for us are health – number one priority.”

Thousands of nurses took unprecedented strike action over pay on Wednesday and a special health summit of political leaders is due to take place on Thursday.

A round table meeting involving all five of the main Stormont parties took place on Wednesday.

Endless rounds of negotiations have failed to produce a breakthrough, with issues such as the place of the Irish language in society in dispute.

The DUP and Sinn Fein suffered reverses in the general election and the cross-community Alliance Party built on gains of recent years.

They face an Assembly poll in the new year with an increasingly disillusioned public if talks led by the British and Irish governments fail.

Mr Poots said considerable work remained to be done but he was seeking a “fair and balanced” deal.

He said: “We will do our utmost to get a sensible deal, a good deal for everyone.”

Mr Poots said it was for Stormont to deal with the nurses’ pay issue.

He added: “Goodwill exists, which is critically important to actually getting a deal, let us build on that goodwill that exists.

“The public want us to get back to business, we need to ensure a fair and balanced deal, a one-sided deal will not work.”

Ulster Unionist leader Steve Aiken said the NHS was an emergency case which should be addressed immediately.

He added: “I cannot see us getting a deal until the new year if there is going to be a deal.

“We do need to get a deal and an agreement and move on.”

“A solution is available which would end the dispute, but the British Secretary of State is holding back on this in a cynical attempt to pressurise the political parties.

“The attempt to exploit the suffering of patients as political leverage in the talks is disgraceful.”

She said Northern Ireland Secretary Julian Smith and the Conservative Government was responsible for the crisis in health services due to a decade of Tory austerity which had torn up the health service’s finances.