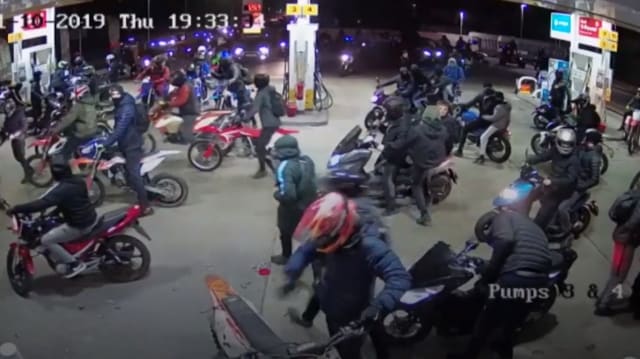 CCTV showing a large group of bikers stealing from a petrol station has been released by police investigating a widespread disturbance on Halloween.

Greater Manchester Police (GMP) is appealing for help to identify the men on motorbikes, who are believed to have been involved in anti-social behaviour in Wythenshawe and Sale on October 31.

The video shows the group entering the forecourt of the petrol station on Altrincham Road before some of them go into the shop and take items.

Officers believe the same group were armed with weapons, including knives and a sword, and involved in numerous incidents of anti-social behaviour that night.

The bikes were seen driving dangerously on motorways and pavements and blocking roads between 6pm and 11pm.

PC Gavin Jackson, of GMP’s City of Manchester division, said: “This was a widespread disturbance across the areas of Wythenshawe and Sale which caused large amounts of distress to residents of those communities.

“We believe the men on bikes shown on the CCTV footage at the petrol station were the same group who were causing mass anti-social behaviour elsewhere that night.

“Due to the widespread instances of that night, we are confident that there are members of the public who will have seen this group or have dash-cam footage through the night and we wish to hear from anyone who may have information.”