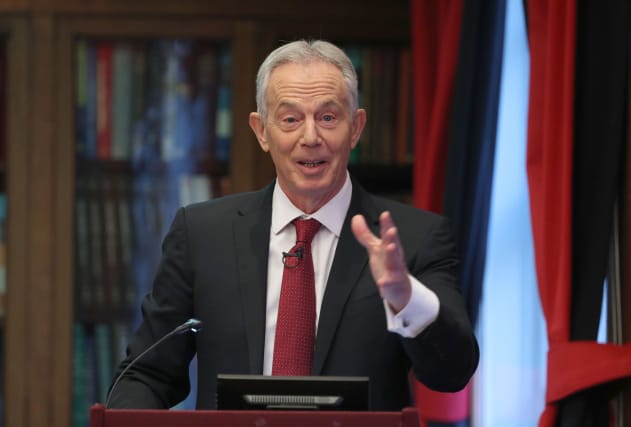 The Labour Party’s “strategy for defeat” going into the General Election was “unforgivable” at such a crucial time in Britain’s history, said former prime minister Tony Blair.

The last Labour leader to win a general election warned that his party would be “finished” if it does not morph into a “progressive modern coalition” with the ability to win and hold power again.

The result saw constituencies in the North and the Midlands which had never elected a Conservative MP in their history turn blue, gifting Prime Minister Boris Johnson a landslide victory.

In a speech in central London, Mr Blair tore into leader Jeremy Corbyn and blamed his “comic indecision” over Brexit and Labour’s “wish list” manifesto for turning the party he once led into an unelectable force.

Mr Blair, who had previously urged Labour not to agree to an election with Brexit unresolved, said “no sensible” party would have gone to the polls topped by a leader “with a net approval rating of minus 40%”.

He accused the leadership of having a “strategy for defeat” and said: “The result has brought shame on us.

“We let our country down. To go into an election at any time with such a divergence between party and people is unacceptable.

“To do it at a time of national crisis, where a creditable opposition is so essential for the national interest, is unforgivable.”

He said the failure to take a position on Brexit had cost the party young voters who were opposed to leaving the European Union, arguing instead that Labour should have adopted a second referendum position on any exit deal as soon as the 2016 result was declared.

And while a shift to back Brexit might have saved northern seats such as his own former constituency of Sedgefield in County Durham, it would have lost places such as Exeter and Hove on the south coast as a result, he told the packed Hallam Conference Centre.

The 66-year-old said Labour must re-group and use the “lessons” from its fourth election loss in a row to shift the party back onto electable ground – or risk being “finished” as a party of government.

Under Mr Corbyn, Mr Blair said Labour had turned into a “glorified protest movement” which had been taken over by left-wing ideals – despite the “misguided ideology” which he said “never appealed to traditional Labour voters and never will”.

“Let us demolish the delusion that the manifesto was popular,” said the former PM of 10 years.

“The sentiment behind some of the policy reflected public anxieties, that’s absolutely true, but in combination it was over 100 pages of wish list.

“Any fool can promise everything for free. But the people weren’t fooled. They know life isn’t like that. And this loading in of free broadband run by government at the last moment was the final confirmation of incredibility.”

In a message for those currently readying themselves to stand in next year’s leadership contest, Mr Blair said: “This is a moment whether we either use the lessons of defeat to build a progressive modern political coalition capable of competing for, winning and retaining power, or accept the Labour Party has exhausted its original mission and is unable to fulfil the purpose for which it was created.”

The three-time election winner also said he did not support the idea that the next Labour leader had to be a woman or come from outside London. But he stopped short of endorsing any of the emerging candidates in the upcoming race.

“What (the public) want is someone who is going to govern the country with a creditable programme,” said Mr Blair.

“If they are from outside London, great. If it is a woman, even better, because this is a moment when we should definitely want that as a Labour Party.

“But the most important thing is having the right political position.”