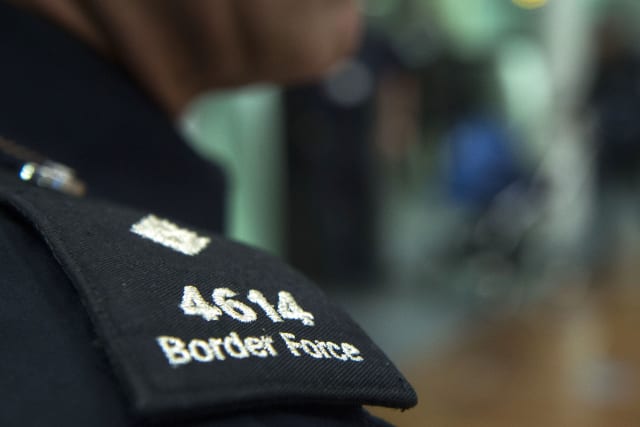 Some 69 migrants – including 10 children – were caught trying to cross the cold English Channel in the dark during the early hours of Tuesday morning.

While air temperatures hovered around 8C in Dover, five small boats were intercepted by Border Force as they made their way towards the UK.

The 69 people presented themselves as Iranian, Iraqi and Uzbek nationals, the Home Office said.

Patrols on French beaches have been doubled and French authorities have stepped up their efforts against criminal gangs.

In the first incident on Tuesday, at about 12.45am a Border Force vessel intercepted a boat which was carrying a group of eight men who presented themselves as Iranian nationals, the Home Office said.

Then at about 3.35am another boat was intercepted, this time carrying a group of 18 people, made up of 14 men, two women and two children.

At 5.10am, Border Force intercepted a boat carrying nine people – seven men and two children who presented themselves as Iranian nationals.

In the fourth incident, a boat carrying 23 people was intercepted at about 5.30am.

The group was made up of 14 men, five women and four children who have presented themselves as Iranian, Iraqi and Uzbek nationals.

In the fifth incident at around 7.45am, a Border Force vessel intercepted a boat carrying a group of 11 people – made up of eight men, one woman and two minors who have presented themselves as Iranian nationals.

The people from all boats have been medically assessed and will now be interviewed by immigration officials.

A Home Office spokesman said: “Those attempting to cross the Channel in small boats are putting their lives in grave danger and the ruthless criminals who facilitate crossings do not care about the risk to life.

“We are working closely at all levels with the French authorities to tackle this dangerous and illegal activity.

“Patrols on French beaches have been doubled and action to disrupt criminal gangs has been intensified.”

Earlier on Tuesday, newly elected Dover & Deal MP Natalie Elphicke said she has sought an urgent meeting with the Home Secretary and called for more to be done in mainland Europe to prevent dangerous crossings.

Mrs Elphicke said: “The French have been given tens of millions of pounds of British hard-earned taxpayer money to stop illegal departures from their shores. I want to know where the money has gone.

“Because while much has been done, it is clear there is more to do.”