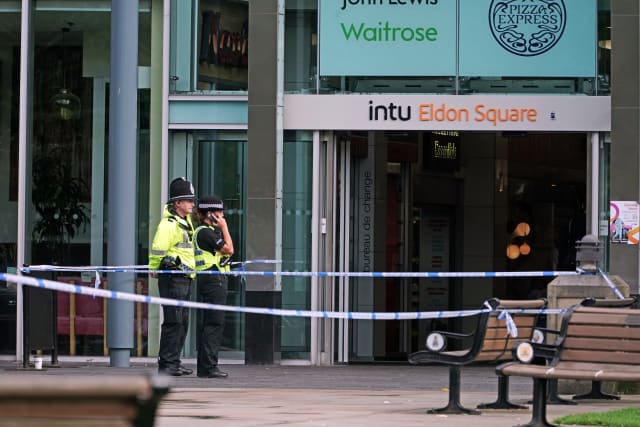 A teenager who stabbed a popular lawyer to death as he walked through a shopping centre has been jailed for life after the victim’s family pleaded with a judge not to let him “devastate any more families”.

Ewan Ireland was just 17 when he attacked 52-year-old Peter Duncan at the entrance to Newcastle’s Eldon Square shopping centre in August.

The two had merely brushed past each other when the agitated youth pulled out a screwdriver he had just shoplifted and stabbed the devoted father once in the heart.

Mr Duncan, who was an in-house lawyer for an international maritime firm, managed to walk a few yards further before collapsing close to a Greggs outlet.

Ireland admitted murder at a previous hearing and was jailed at Newcastle Crown Court on Tuesday for a minimum of 15 years.

In a victim impact statement, Mr Duncan’s widow Maria said: “The person who did this had convictions.

“Nothing stopped him. He continued and he murdered my husband.

“Please do not allow him to devastate any more families. He is a danger to all of us.”

The court heard Mr Duncan’s 15-year-old son was in the city centre that evening for a cinema trip and saw the cordoned off area without realising his much-loved father had been attacked.

In a victim statement he said: “At the time he (Ireland) had been released under investigation in relation to another incident in which a weapon was used.

“I am angry he was out free, and cannot understand why he was not locked up.

“If he had been we would still have my dad to this day.”

Caroline Goodwin QC, defending, said Ireland “had spoken of his absolute remorse and devastation at the act he occasioned which was needless and senseless and took away from the family their father”.

The media was able to publish Ireland’s once he turned 18 in October.

After the killing, which caused shock and outrage on Tyneside, Northumbria Police said the attack was unprovoked and described it as a “chance encounter”.

The day after the murder, Mr Duncan’s family said: “Peter was a kind and caring man who was always first to help others.

“He was a devoted father, husband, son, brother, uncle and friend and loved by all who knew him. His death will leave such a huge hole in our lives and he’ll be deeply missed by us all.

“Words can’t quite describe what life will be like without him.

“He had so much of his life left to live and he’ll be in our hearts and thoughts every day.”

After Ireland pleaded guilty, it emerged that he was a serial offender who continued to commit violent crimes despite being on bail.

At the time of the killing he was on bail for an offence of affray, was under investigation for a robbery and still subject to a 12-month conditional discharge for a battery offence the previous summer.

Newcastle Crown Court heard he has appeared in court on 17 occasions and has 31 criminal offences on his record.