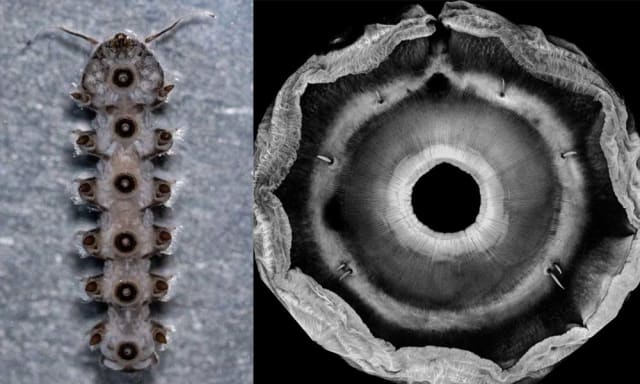 Travelling up a river flowing as fast as three metres per second is no simple feat for any creature but certain insects have super strong suction organs that make it a walk in the park.

The hold of these organs is so strong they will only give way if pulled by something 600 times their body weight.

Researchers from the University of Cambridge’s department of zoology admitted even they themselves struggled to stay steady on their feet as they studied the insects in the fastest flowing parts of alpine rivers near Innsbruck, Austria.

They found that the suction of two species of the larvae – Liponeura cinerascens and Liponeura cordata – is held so tightly thanks to a central piston, controlled by specific muscles.

A number of tiny hairs help the larva stay firmly in place when against the rock surface.

When they wish to go about moving, another set of muscles kick into action, controlling a tiny slit on the suction disc which is pulled open allowing the suction organ to detach.

The team behind the findings say this is the first time such an active detachment mechanism has been seen in any biological system.

“The force of the river water where the larvae live is absolutely enormous and they use their suction organs to attach themselves with incredible strength,” explained Victor Kang, a PhD student in the University of Cambridge’s department of zoology and first author of the paper.

“If they let go they’re instantly swept away. They aren’t bothered at all by the extreme water speeds – we see them feeding and moving around in all directions.”

Scientists are using the research to explore the idea of developing better suction cups than the ones we currently use that are dependent on smooth, clean surfaces.

“By understanding how the larvae’s suction organs work, we now envisage a whole host of exciting uses for engineered suction cups,” said Dr Walter Federle, who led the study.

“There could be medical applications, for example allowing surgeons to move around delicate tissues, or industrial applications like berry picking machines, where suction cups could pick the fruit without crushing them.”

The research appears in the BMC Zoology journal.