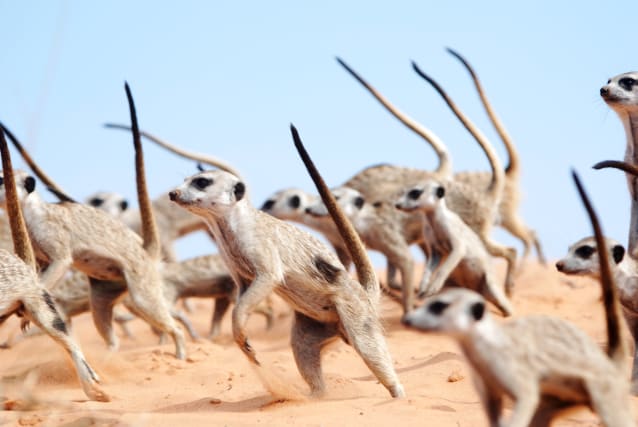 Meerkats put on a fierce show and dance to fend off potential threats, a new study has found.

Scientists studying clans over 11 years noticed that more than half of interactions with others lead the clan to chase or put on a war dance.

This includes an erect tail and puffed-out fur, in a bid to make the mob appear much larger than it is, researchers at University College London and the University of Cambridge claim.

Despite their furry appearance, meerkats are known for being very territorial – clashes with other gangs can often turn aggressive and sometimes escalate to fighting.

“We show that interactions between meerkat groups are never tolerant, that the majority involve some form of aggression, and that a minority result in physical violence,” said Dr Mark Dyble, evolutionary anthropologist at UCL.

They found that in almost nine in ten cases, aggressive encounters ended with one of the two gangs retreating before direct physical contact.

But 9% of the time, incidents did lead to fighting, resulting in at least one meerkat fatality.

“We show that although meerkat intergroup aggression only occasionally results in an individual being killed, winning fights with neighbouring groups is critical to maintaining a territory,” Dr Dyble added.

“In the harsh semi-desert of the Kalahari, a good quality territory is critical to a group’s survival and long-term success.”

The findings are published in the Proceedings of the Royal Society B journal.