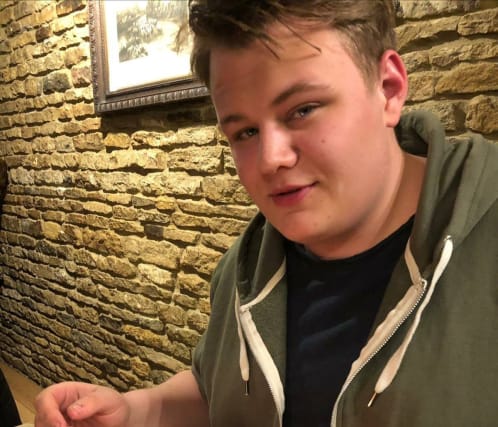 A police chief has sent a written apology to the family of teenage motorcyclist Harry Dunn for a “breakdown” in communications.

Northamptonshire Police Chief Constable Nick Adderley promised the 19-year-old’s parents that he will work “tirelessly” to bring the US suspect back to the UK as the crash victim’s mother remains in “bits and pieces” at home.

Charlotte Charles “collapsed in a heap” after watching footage of 42-year-old Anne Sacoolas reversing out of her driveway in the state of Virginia and did not attend the meeting with Mr Adderley on Tuesday due to being “utterly devastated”.

Harry was killed when his motorbike was involved in a head-on collision with a car outside RAF Croughton in Northamptonshire on August 27.

Mrs Sacoolas claimed diplomatic immunity after the crash and was able to return to the US.

Harry’s father Tim Dunn, stepmother Tracey Dunn and stepfather Bruce Charles all sat down with Mr Adderley for “positive” clear-the-air talks after the family originally called for the police chief to resign.

Mr Adderley told reporters that any perceived fallout had been a “total misunderstanding” – adding that certain tweets and conversations had been “completely misconstrued”.

The Chief Constable said an apology was “all in writing” and was sent through the family spokesman Radd Seiger.

Mr Adderley also said tweets calling for his resignation had been “completely blown out of proportion”.

Speaking at the force’s HQ, Mr Adderley said: “This morning, it’s been really important that we get together, it’s been incredible for me to actually sit opposite Tim, Tracey, Bruce and Radd and talk through some of the things that have gone well and have not gone so well involved in Harry’s death.

“The really important thing though and what today has really shown is that we can work together, and we are going to work together.

“I do want to make the point though that actually the fallout, or the perceived fallout between me personally and with Radd and the family has been a total misunderstanding.

“Certain tweets and conversations and comments that have been made have been completely misconstrued. We spent some time going through all of that.”

Addressing the reasons why there had been a breakdown in communications, Mr Adderley continued: “I need to try and remain impartial and I have to show fairness to a certain point where we have suspects in a case.

“What I can’t be seen to be doing is actually stepping out on one side or another – that’s not the role of the police, that’s not my role as chief constable.

“We then get a situation where what I’m trying to do is protect the process and protect justice.

“I don’t know what the CPS are going to say, if they actually say death by dangerous or death by careless, I don’t know, but what we have to do is preserve the evidence, go where that takes us, and try and make sure that what we have is an opportunity to see that justice is done.

“So this miscommunication, this breakdown, and I’ve explained to Radd, and I’ve written to Radd – it’s all in writing in terms of the apology.

“And the same with a tweet that was mentioned, which was calling for resignations, it completely got blown out of proportion.”

Giving an update on how the family are feeling, Mr Seiger told reporters: “Charlotte has not been able to make the meeting today with the Chief Constable because she is just in bits and pieces.

“Seeing that footage of Anne Sacoolas seemingly moving on with her life – I get the impression that was without a care in the world, that may be unfair but that’s the, that’s what it felt like – I mean, she just collapsed in a heap.

“I’ve struggled to pick her up ever since. Utterly devastating.”