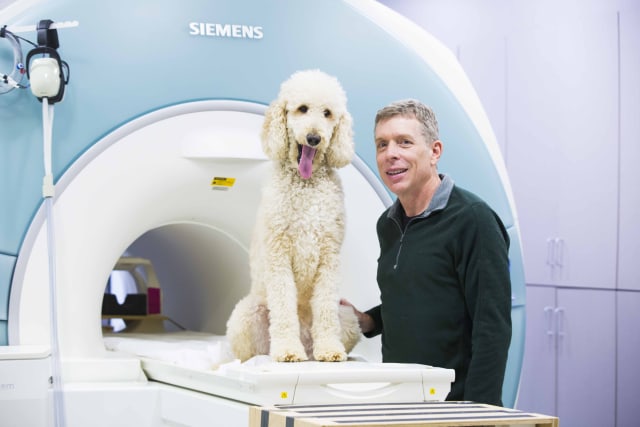 Dogs often know their owners are holding something back when all of the treats that go into the pocket do not come out.

Now scientists believe they may have discovered why.

According to the study published in Biology Letters, this suggests a common neural mechanism has been deeply conserved across mammalian evolution.

Gregory Berns, professor of psychology at Emory University in America, and senior author of the study, said: “Our work not only shows that dogs use a similar part of their brain to process numbers of objects as humans do – it shows that they don’t need to be trained to do it.”

Co-author Stella Lourenco, an associate professor of psychology at Emory, added: “Understanding neural mechanisms – both in humans and across species – gives us insights into both how our brains evolved over time and how they function now.”

She said that such insights may one day lead to practical applications such as treating brain abnormalities and improving artificial intelligence systems.

Researchers trained dogs to lie still in a functional magnetic resonance imaging (fMRI) scanner and analysed their responses to varying numbers of dots flashed on a screen.

The results showed that the dogs’ parietotemporal cortex responded to differences in the number of the dots.

Scientists held the total area of the dots constant, demonstrating it was the number of the dots, not the size, that generated the response.

The approximate number system supports the ability to quickly estimate the number of objects in a scene, such as the number of predators approaching or the amount of food available for foraging.

Researchers say evidence suggests that humans primarily draw on their parietal cortex for this ability, which is present even in infancy.

Appearing to be widespread throughout the animal kingdom, this basic sensitivity to numerical information, known as numerosity, does not rely on symbolic thought or training.

Much of the research in non-humans, however, has involved intensive training of the subjects.

However, much of the research in humans has involved intensive training of the subjects.

Eleven dogs of varying breeds who had not received any advanced training in numerosity were involved in the study.

After entering the fMRI, they passively viewed dot arrays that varied in numerical value.

Eight of the 11 furry creatures showed greater activation in the parietotemporal cortex when the ratio between alternating dot arrays was more dissimilar than when the numerical values were constant.

First author of the study, Lauren Aulet, a PhD candidate, said: “We went right to the source, observing the dogs’ brains, to get a direct understanding of what their neurons were doing when the dogs viewed varying quantities of dots.

“That allowed us to bypass the weaknesses of previous behavioural studies of dogs and some other species.”

Prof Berns said that humans and dogs are separated by 80 million years of evolution, but the study provides “some of the strongest evidence” yet that numerosity is a shared neural mechanism that goes back at least that far.