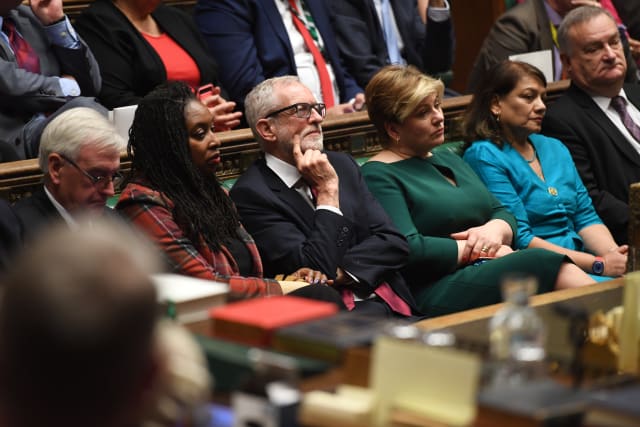 Jeremy Corbyn faced fury from Labour MPs after apologising for the party's devastating defeat and assuring colleagues he was only staying on until a new leader is elected to ensure "the smoothest possible transition".

The outgoing Labour leader was accused of showing insufficient remorse after addressing MPs in Parliament on Tuesday evening as he sought to quell the fall-out over the party's worst general election result since 1935.

Some MPs and defeated candidates have been levelling the blame squarely at Mr Corbyn, saying his past record and the volume of his left-wing policies were damaging on the doorstep.

Mr Corbyn apologised to a fractious meeting of the Parliamentary Labour Party (PLP), which was attended by several potential successors and many vocal critics.

"I am very sorry for the result for which I take responsibility," he told them.

"I will continue to lead the party until a new leader is elected. I want us to have the smoothest possible transition for the sake of the party as a whole and for those Labour mayors and councillors who are up for re-election in May."

Mr Corbyn maintained his defence that Brexit was a major reason voters lost their trust in Labour and repeated his criticism of the media.

"The Tory campaign amplified by most of the media managed to persuade many that only Boris Johnson could 'get Brexit done'. That will soon be exposed for the falsehood it is," he said.

"We need to go to places where we lost and genuinely listen to what people want and what they believe is possible."

Potential leadership candidate Jess Phillips said the meeting was largely critical of Mr Corbyn with only "a couple of people being supportive".

The Birmingham Yardley MP said she read to the meeting a text from Melanie Onn, the former Labour MP who lost her Great Grimsby seat to the Tories, about "how she had been let down by the leadership and the frontbench and that nobody had bothered with Grimsby".

"There are lots and lots of complaints about how nobody has called any of the people who lost," Ms Phillips told reporters as she left the meeting.

Veteran Labour MP Dame Margaret Hodge, who has long been critical of Mr Corbyn, said that "on the whole it was fury, despair, miserable and I just felt that the top table had corporate amnesia".

Numerous Labour MPs said, however, that Mr Corbyn was not told to go immediately with them apparently supporting his plan to depart after overseeing a "process of reflection".

Ilford North MP Wes Streeting criticised Mr Corbyn for carrying on "just like business as usual", adding: "Nothing about the tone and content of what we heard reflected an election defeat worse than 1935."

Hove MP Peter Kyle added: "It wasn't any more heartfelt, it wasn't a direct apology to the group. It was a generalised apology for the situation that he appears to have found himself in."

Former shadow work and pensions shadow Rachel Reeves said she told the meeting Labour needs "radical change" and get a leader "that actually wants to win".

"If we want to change the lives of the people we came into politics to serve then we've got to win power and that's not been possible two times under Jeremy Corbyn's leadership," Ms Reeves told reporters.

Earlier in the day Mr Corbyn was confronted by former Labour shadow cabinet member Mary Creagh, who lost her Wakefield seat, after she cleared out her parliamentary office.

She told Channel 4 News she criticised the leader for having "enabled a hard Brexit" and "five years of austerity".