Johnson pledges to work ‘flat out’ to deliver on election promises 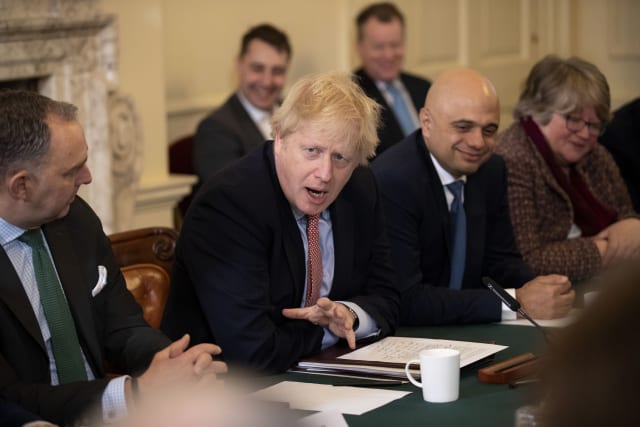 Boris Johnson has vowed to work "flat out" to deliver on his new Government's priorities amid warnings that he is driving the country towards a no-deal Brexit.

Addressing the first meeting of the Cabinet since last week's election victory, the Prime Minister said there would be no let-up in the "frenetic" pace, telling ministers: "You ain't seen nothing yet, folks."

His comments came as Downing Street disclosed that the Government is to legislate to prevent MPs extending the Brexit transition period beyond the end of 2020.

Ministers are re-working the Withdrawal Agreement Bill (WAB) – due to come before the Commons this week – to "legally prohibit" any further extension while talks on a free trade agreement continue.

Opposition parties said the move was putting the UK on course for a "cliff-edge" no-deal break with the EU in just 12 months' time.

"The only way Johnson can meet the December 2020 timetable is by giving up all his previous promises to Leave voters and agreeing to all the demands of the EU."

Addressing Cabinet, Mr Johnson sought to drive home his message that the Government must now repay the trust of the voters who returned the Tories to power – many of them having voted Conservative for the first time in their lives.

"We should have absolutely no embarrassment about saying that we are a People's Government and this is a People's Cabinet, and we are going to be working to deliver on the priorities of the British people," he said.

"That's what they want us to do and we must recognise that people lent us their votes at this election.

"It was quite a seismic election but we need to repay their trust and work 24 hours a day, work flat out, to deliver on this."