I am angry he was out free, says son of solicitor murdered by serial offender 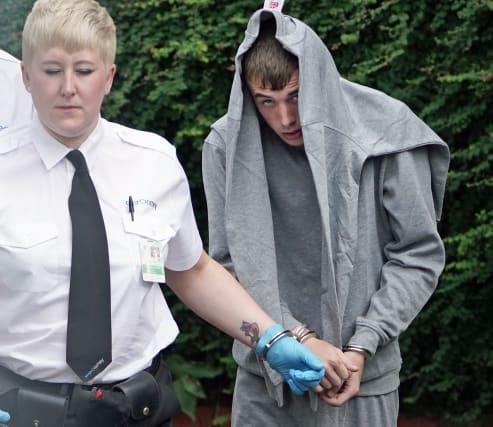 The family of a murdered solicitor have expressed their anger that a violent and dangerous teenage offender was out on the streets and free to kill.

The sentencing judge said it was 52-year-old Peter Duncan's bad luck to bump into Ewan Ireland, then aged 17, when he was trying to get home after a day at work in Newcastle city centre.

Mr Duncan, a much-loved and hard-working father of two boys, and his killer accidentally brushed against each other at a busy entrance to the Eldon Square shopping centre, and Ireland reacted angrily and stabbed his victim in the heart with a screwdriver he had shoplifted minutes before.

Newcastle Crown Court heard Mr Duncan struggled on for a few steps before collapsing near a Greggs outlet, and he could not be saved.

Mr Justice Lavender sentenced Ireland to life with a minimum term of 15 years, saying the sentence would have been longer had he been 18 at the time.

The incident happened in August and Ireland turned 18 in October.

Richard Wright QC, prosecuting, said: "The doorway into the shopping centre was busy with shoppers coming and going and congested by the youths loitering in that area.

"As Peter Duncan walked into the complex, it was his misfortune to accidentally collide with the defendant.

"It was plainly an unintended and accidental contact, but the defendant reacted to it by immediately launching an attack upon Peter Duncan."

At the time Ireland, who had hopes of playing for Newcastle United, was on bail for an offence of affray, was under investigation for a robbery and still subject to a 12-month conditional discharge for a battery offence the previous summer.

The court heard he has appeared in court on 17 occasions and has 31 criminal offences on his record.

In a victim impact statement, Mr Duncan's widow Maria said: "The person who did this had convictions.

"Nothing stopped him. He continued and he murdered my husband.

"Please do not allow him to devastate any more families.

Mr Duncan's 15-year-old son was in the city centre that evening for a cinema trip and saw the cordoned off area without realising his father had been attacked.

In a victim statement, he said: "At the time he (Ireland) had been released under investigation in relation to another incident in which a weapon was used.

"I am angry he was out free, and cannot understand why he was not locked up.

"If he had been we would still have my dad to this day."

Caroline Goodwin QC, defending, said Ireland "had spoken of his absolute remorse and devastation at the act he occasioned which was needless and senseless and took away from the family their father".

Sentencing, Mr Justice Lavender said Ireland's offending started at the age of 14, and he has offences of theft, battery, public order and making threats with knives on his record.

"All too often, young men like you, who get into the habit of carrying weapons and using them to threaten others, move on to using those weapons to harm others, as you have done."

A defence psychiatrist reported that Ireland had "severe autism spectrum disorder and intermittent explosive disorder" – the second of which means he was unable to control "impulsive or anger-based aggressive outbursts", the judge said.

The prosecution psychiatrist said he had "traits of autism spectrum disorder" and "conduct disorder" – symptoms of which include "excessive levels of fighting".

The judge said: "On either view, you are clearly someone who finds it difficult to control your temper and to refrain from violence."