Giddy up: Galloping crocodiles can clock up speeds of 11mph 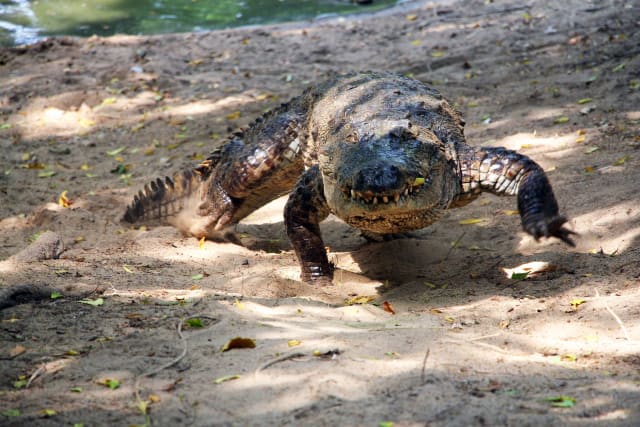 Galloping is a graceful movement usually associated with horses rather than crocodiles.

But researchers have found that more species of crocodile can gallop than previously thought.

Other crocodilians such as alligators and caiman do not have the same range of movement, and can only manage a trot.

Nevertheless, crocodiles and alligators can rack up the same top of speed of about 11mph.

The study, which was led by the Royal Veterinary College (RVC), suggests the ability to gallop – and use an even more extreme gait called a bound – is likely to be down to the size and build of the reptile in question.

Professor John Hutchinson, a specialist in evolutionary biomechanics at the RVC and study lead, said: “We were really surprised at one major thing – despite the different gaits crocodiles and alligators use, they all can run about as fast.

“So why do some crocodiles choose to gallop? We suspect that bounding and galloping give small crocodiles better acceleration and manoeuvrability, especially useful for escaping from danger.

“It seems like alligators and caiman stand their ground rather than run away with an extreme gait.”

Researchers at the RVC set up video cameras at the St Augustine Alligator Farm and Zoological Park in Florida, USA.

Working with experts from that organisation, they studied the gaits and speed of 42 individuals from 15 species of crocodilia.

They found that, as expected, larger members of the family moved relatively more slowly, with athletic ability decreasing as size increased.

However, while many popular and scientific accounts previously assumed only a few species of crocodiles could gallop and bound, the researchers discovered that a further five species can in fact do so, including the critically endangered Philippine crocodile.

This now means at least eight species in total can gallop and bound.

John Brueggen, director of St Augustine Alligator Farm and Zoological Park, said: “We have been witnessing these behaviours in many of our specimens over the years, but it was wonderful to finally formalise these observations in a scientific study.”

– The study findings are published in Scientific Reports.