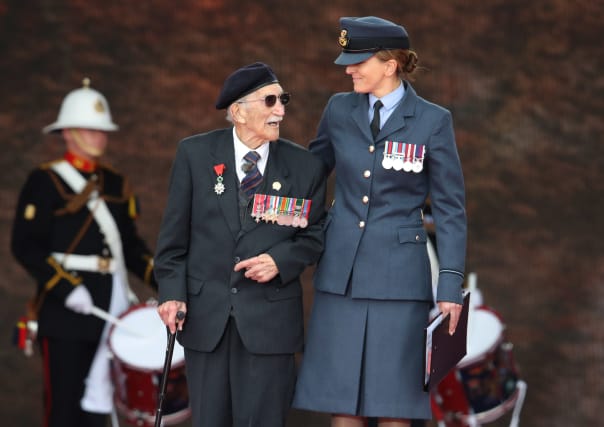 A D-Day veteran who received a standing ovation from world leaders including the Queen and Donald Trump at the 75th anniversary commemorations of the Normandy landings has died at the age of 100.

John Jenkins, who served as a platoon sergeant during the Second World War and was awarded the Legion d’Honneur for his part in D-Day, died after celebrating his birthday last month.

The centenarian still kept active through his role as boardroom steward at Portsmouth FC and as a volunteer at the D-Day Story Museum.

He received a standing ovation from world leaders when he took to the stage during the national D-Day commemorations on Southsea Common in his home city of Portsmouth, Hampshire, in June.

After leaving school, Mr Jenkins became a bellboy for the Cunard cruise line in 1933 before he attempted to join the Royal Navy but was turned down because of his eyesight.

He went on to join the Hampshire Regiment of the Army before moving to the Pioneer Corps, in which he served as a platoon sergeant during the Second World War and was awarded the Legion d’Honneur for his part in D-Day which he would sum up in one word – “terrifying”.

Mr Jenkins went on to become a trolley bus driver after the war before working as a crane operator in Portsmouth Naval Base.

Mr Jenkins, a widower, was married to his wife Peggy, and had one daughter, two granddaughters, five great-grandchildren and a great-great-grandson.

He became the oldest man to abseil down Portsmouth’s Spinnaker Tower at the age of 95 in 2015, carried the Olympic torch in 2012 and was awarded Portsmouth Volunteer of the Year in 2016 and was also awarded National Museum and Heritage volunteer of the year 2019.

Portsmouth South MP Stephen Morgan posted on Twitter: “John Jenkins MBE was one of Portsmouth’s very own D-Day heroes. His bravery and commitment to serving this country will stand the test of time and it was a privilege to have spent some time with him. Rest in peace John.”

Portsmouth North MP Penny Mordaunt posted: “John Jenkins’ life was one of service and dedication. This year we were reminded again of what he did for our nation.

“Listening to his account of those times, the friends he lost, his character shone through: modest, brave and kind. We all loved him. Thank you John.”

Portsmouth FC posted: “#Pompey are mourning the sad death of John Jenkins MBE, who has passed away at the age of 100.”