Commons welcomes babies of the House as MPs take their seats 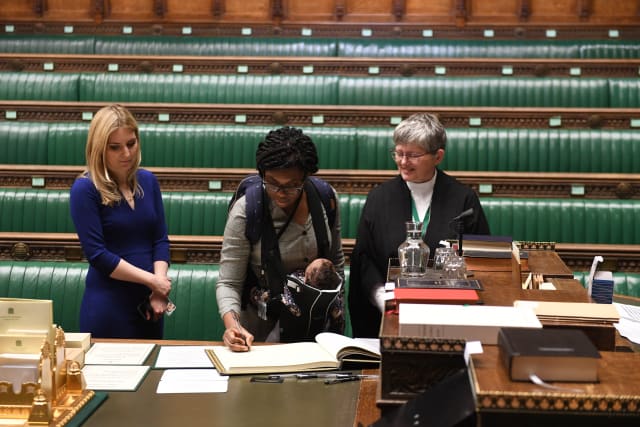 Babies of the House were welcomed to Parliament as MPs returned to Westminster following the general election.

Conservative education minister Kemi Badenoch was sworn in alongside her new baby and held the King James Bible while her daughter was strapped to her body.

Labour’s Stella Creasy also brought her baby daughter Hettie in a sling during her visit to the chamber.

The pair were among the hundreds of MPs who went through the process of making an oath or solemn affirmation of allegiance to the Crown in order to take their seats in Parliament.

The actual title of “baby of the House” falls to the youngest MP, who is now Labour’s Nadia Whittome (Nottingham East) – aged 23.

The Commons erupted into a chorus of “ohs” when newly re-elected Commons Speaker Sir Lindsay Hoyle reminded MPs that until they take the oath or affirm they “will not receive any salary”.

After the Father of the House, Sir Peter Bottomley, was sworn in, the Prime Minister was asked if he wanted to take the oath or to affirm, to which he said: “I will swear.”

Reading the oath, he said: “Boris Johnson, Uxbridge and South Ruislip, I swear by almighty God that I will be faithful and bear true allegiance to Her Majesty Queen Elizabeth, her heirs and successors according to law, so help me God.”

Cabinet Office Minister Oliver Dowden became the first MP to have to take the oath for a second time, after getting it wrong on the first attempt.

In his first try, Mr Dowden said: “Oliver Dowden. Hertsmere. I swear by almighty God that I will be faithful and bear true allegiance to Her Majesty Queen Elizabeth, her heirs and successors according to God, to law, so help me God.”

Labour Party leader Jeremy Corbyn was the first member of his party to complete the swearing-in process and opted to affirm.

Shadow women and equalities secretary Dawn Butler asked the clerk the difference between choosing to take the oath and affirm before opting to affirm while shadow defence secretary Nia Griffith chose to complete the swearing-in process in both English and Welsh.

International trade minister Graham Stuart asked for “the secular one please” when he chose to affirm.

Following members of the shadow cabinet, privy counsellors took their turn to complete the swearing-in process.

Among those included former Tory prime minister Theresa May, who chose to take the oath, plus former Labour leader Ed Miliband and “Mother of the House” Labour’s Harriet Harman, who both opted to affirm.

Labour MP Afzal Khan wrote on Twitter: “Today at the swearing-in ceremony, I recited my oath in #Urdu to honour my father who served in the British Indian Army.”

Conservative MP Anthony Mangnall (Totnes) became the first of the newly-elected MPs to complete the swearing-in process, despite being told by the Speaker that the latest recruits would be sworn in on Wednesday.

Labour’s Tahir Ali – who replaced Roger Godsiff as Birmingham Hall Green MP – was the first of the party’s newly-elected 2019 cohort to be sworn in.