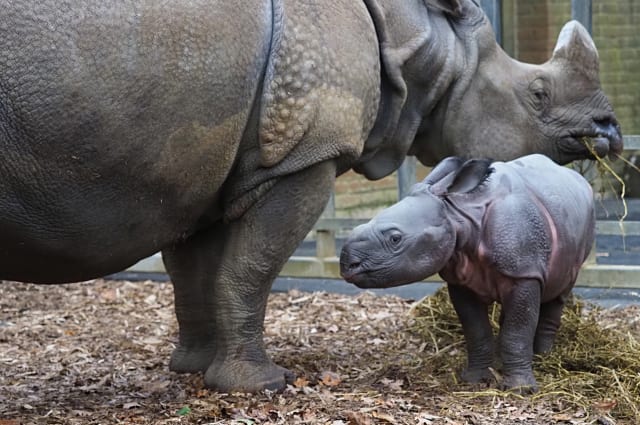 A baby rhino born at ZSL Whipsnade Zoo has been called the “best Christmas present” keepers could have asked for.

The endangered greater one-horned rhino was born to mother Behan and father Hugo on December 8.

The baby rhino, born as part of the European Breeding Programme for the species, is Behan’s fifth offspring, and will be named by one of the zoo’s supporters.

ZSL team leader Mark Holden said: “We knew Behan was expecting so ZSL’s zookeepers have been keeping a close eye on her throughout the 16-month-long pregnancy – we checked on her the night before and found her calm and relaxed in her indoor dens.

“Coming in early the following day, they were delighted to find a healthy female calf standing next to her mother, having been born in the early hours.

“Since then, she has been getting more adventurous every day; under her mum’s watchful gaze she has even started to tentatively venture outside.

“With only around 3,500 greater one-horned rhinos left in the wild, this little one’s arrival is the best Christmas present we could have wished for.”