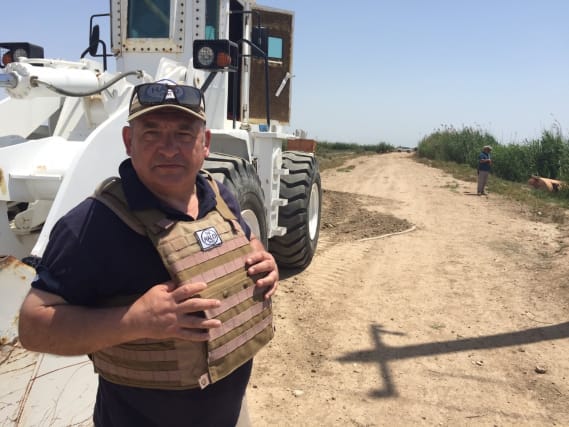 An army veteran who served in Iraq has returned to the country to lead the fight against landmines and is urging the public to donate to help clear the deadly devices.

Frank Philip leads mine clearance charity The Halo Trust’s work in Iraq and believes he is “making progress” in the battle against improvised explosive devices (IEDs) left buried there.

He said the explosives are often triggered by refugees returning to rebuild their lives, recounting a recent meeting with one Iraqi who told him his nephews were killed during building works in southern Fallujah.

Mr Philip said: “They had been operating a front-loader shovel and triggered an IED, basically in this guy’s front garden.

“In a 500-metre radius from where we were standing, he counted 15 people who had been killed in the past 12 months.

“Accidents are happening because people are leaving the refugee camps and coming home.

“They know that there are explosive hazards everywhere but they are just desperate to start rebuilding their houses and lives.”

He added: “The standards of IED we are pulling out the ground are like a 20-litre jerry can with a fuse, a power source and a switch, which is a pressure plate normally.

“They are designed to make a big bang and if something that size detonates underneath you, there’s only one result.

“It’s not like anti-personnel mines that are designed to wound or maim. These IEDs will remove all traces of you if they function and there’s still a lot out there.”

Mr Philip’s team is helping to train and employ 150 Iraqis and teach communities how to avoid explosives.

They have cleared some 500 landmines to date.

He said: “It’s painstaking work. I couldn’t even hazard a guess at how many landmines or explosive devices will need to be cleared.

“There must be hundreds of thousands. It’s not just landmines and IEDs. There is unexploded ordnance everywhere.”

He added: “What you do is tangible. You can measure it by the amount of ground you clear, the amount of IEDs you pull out of the ground, the number of beneficiaries that you can count.

“I love this job because I feel that I am making progress.”

The 60-year-old, who was born in Montrose, Angus, and now lives in Kinloch Rannoch, Perthshire, is urging the public to donate to the Dumfries-based charity’s campaign.

It now hopes to save more than 3,000 people in Zimbabwe from the threat of landmines.

He said: “Whether they are laid in Iraq, Afghanistan, Colombia or Zimbabwe, landmines destroy lives.

“Every pound the public gives to our Breaking Boundaries campaign is being doubled by the UK Government through UK Aid Match, which means we can clear twice as many minefields and help twice as many people.”

Donations to December 22 are being doubled.

“HALO Trust is a Scottish charity that is a world leader in demining and I am proud that through UK Aid Match, we will double generous donations from the British public to help rid Zimbabwe of these deadly explosives.

“The UK Government is deeply committed to clearing landmines in Zimbabwe and across the world so no-one has to live in fear of one wrong step.”