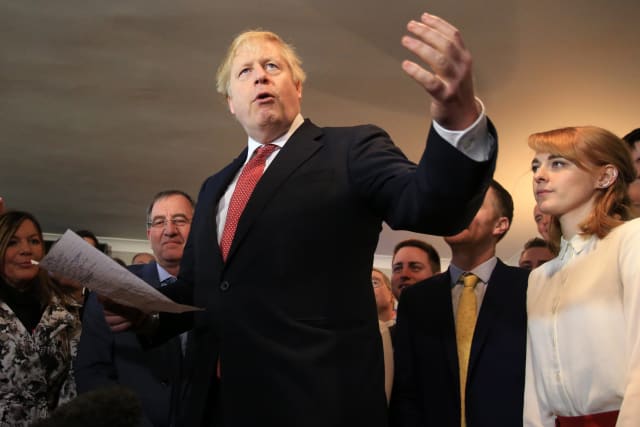 Boris Johnson celebrated gains across the North and the Midlands at the General Election – and with that success, a very different looking Conservative Party was born.

He told those new Tory voters he would work “flat out” to “earn” their future support and told his own ranks that the party and Parliament must change to reflect the result.

Here is a look at what the Prime Minister is said to be hoping to promise those regions.

– Why has Mr Johnson signalled Government needs to change?

Seats all along Labour’s so-called “red wall” across the North and Midlands switched to blue control on Thursday, helping to hand Mr Johnson the largest Tory majority since the days of Margaret Thatcher.

In a speech made on Friday morning, the PM said he recognised that many voters, with their family’s history of supporting Labour weighing heavily, did not vote Tory lightly.

“I will make it my mission to work night and day, flat out, to prove you right in voting for me this time, and to earn your support in the future,” he told supporters in Westminster.

“And I say to you that in this election your voice has been heard – and about time too.”

– How does the PM think the voice of these communities has been ‘heard’?

Mr Johnson’s message of “Get Brexit done” will have resonated in Leave-voting areas such as Blyth Valley, Blackpool South and West Bromwich East – all once Labour-backing areas that returned Tory MPs.

But the PM is understood to feel, having won their support this time, he must do more than simply deliver on his Brexit pledge if he is to retain the support of traditional Labour voters.

– What is he promising?

The Tory manifesto had a number of headline offers – more money for the NHS, the heavily-disputed pledge of 50,000 new nurses, an additional 20,000 police and an Australian-style points-based immigration system.

But, according to briefings in right-leaning newspapers, Mr Johnson is preparing to go even further in a bid to permanently wed new Tory voters to his cause in the long-term.

He will spend almost £80 billion on road and rail upgrades in the North, according to the Sunday Times.

A Number 10 source said: “This election and the new generation of MPs that have resulted from Labour towns turning blue will help change our politics for the better.”

– Where is this extra cash coming from?

The Tory manifesto set itself spending rules that stated a maximum of £100 billion could be spent on capital projects in the five years leading up to the next general election in 2025.

With only £22 billion of that allocated, Mr Johnson wants to use the remaining £78 billion to improve infrastructure across the North and Midlands, aides briefed.

– What would £78 billion buy those regions?

Transport for the North has put forward 30-year improvement proposals that come with a bill of £70 billion.

They entail building the High-Speed 3 railway – also known as Northern Powerhouse Rail – to connect the major conurbations of the North from west to east, linking Liverpool, Manchester, Leeds, Sheffield, Hull and Newcastle.

A trans-Pennine tunnel between Sheffield and Manchester has also been mooted, along with a new city centre railway station for Bradford, while Manchester Piccadilly is due a “significant upgrade”, according to the Sunday Times.

Andy Burnham, Mayor of Greater Manchester, has called for central Government to provide him with the cash to subsidise bus fares to help bring down the cost of public transport.

A bus ticket costs £4 in Manchester compared to £1.50 in London, said the Labour city leader.

– Has all this been given the green light?

Mr Johnson did not outline where all his extra capital spending would go in the manifesto, so it would be difficult for him to argue the public backed his Northern splurge as a result of his election victory.

But few people dispute that the UK economy needs re-balancing and that London continues to play an overly centralised role in driving the country’s wealth.

It does put the former London mayor on course for a fiscal showdown with Chancellor Sajid Javid who has expressed caution in the past about heavy borrowing.

Since Mr Johnson was at pains to rule out tax rises during the election campaign, a heavy chunk of this investment will likely have to be paid for via that route.