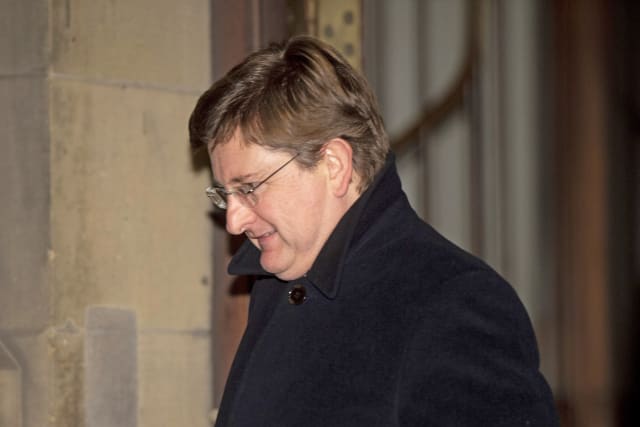 A solicitor has been convicted of assaulting a fashion designer during a row in the front row of an opera house.

Matthew Feargrieve, 43, was found guilty on Monday of punching Ulrich Engler at least once while attending a performance of Wagner at the Royal Opera House on October 7, 2018.

Feargrieve, an investment funds lawyer, lashed out against Mr Engler with “a constant flow of blows” after the designer climbed into an empty seat next to Feargrieve’s partner Catherine Chandler and moved her coat.

Mr Engler told City of London Magistrates’ court he had moved into the empty chair in row A from his seat in row B at the opera three days earlier and did so again on October 7.

Prosecutor Charles Shelton said: “We say Mr Feargrieve had seen Mr Engler climbing over the seat before that night and took some offence.

“He thought it was poor form and he was annoyed at Mr Engler for that kind of action.”

Mr Engler said he asked Ms Chandler if he could sit in the vacant seat next to her. When she said he could not, he asked whether she had purchased the extra seat.

Ms Chandler said she had not, and so Mr Engler moved into the seat with a better view than his own, moving Ms Chandler’s coat and putting it on her lap.

Feargrieve then “lashed out” and punched Mr Engler at least once.

Mr Engler, whose clients include the Countess of Derby, told the court he was attacked at least 10 minutes into the performance and left with injuries to his left side.

“I had never seen someone looking with so much anger and terror at me,” Mr Engler said.

“He was up, leaning over the woman hitting me. While Mr Feargrieve was hitting me he said ‘how dare you talk to my wife like this’.

“The only three things I said to this woman was would you mind if I sat next to you again, have you paid for the seat, and that I was sorry.”

Mr Engler was banned from the Royal Opera House after the incident.

Elaine McMaster, a former physiotherapist who was attending the opera, told the court Mr Engler “neatly” and quietly climbed over without causing a disturbance to Feargrieve or Ms Chandler.

However, she criticised the couple for their conduct at a previous performance.

“They spoiled the whole evening for me, I couldn’t see the stage at all,” she said.

“They just didn’t seem at all concerned by the fact they were annoying everyone in their area.”

Ms McMaster said the couple were distracting other patrons by swaying side to side to the music as Ms Chandler was flicking her hair and being noisy.

“People don’t behave like that in their local cinema, let alone in the Royal Opera House,” she added.

Giving evidence, Feargrieve said he only pushed Mr Engler and did so in self-defence after he attacked Ms Chandler, his partner of 13 years.

He claimed that his shoulder was dislocated as a result of Ms Chandler being shoved into him by Mr Engler.

District Judge John Zani did not accept Feargrieve’s evidence or argument of self-defence and after a one-day trial, the lawyer was found guilty of common assault.

District Judge Zani said: “I was not in the Royal Opera House on the day in question so I have to decide from the evidence I have heard and read.

“The events that unfolded occurred in the way Mr Engler recalled. I am entirely satisfied that the prosecution have dismantled the defence you have put forward.

“This is not a case of one’s man punch is another man’s shove.”

District Judge Zani added: “Your evidence has been consistently that maybe fingertips touched.

“I accept the evidence of the prosecution witnesses where they say you punched Mr Engler at least once maybe twice or three times.

“I am entirely satisfied that you are guilty.”

The court heard Mr Engler was diagnosed with PTSD after the incident.

In a statement read in court, the designer said: “I am still nervous when in public and around strangers I am fearful.

“I am not the easy-going person I was. This has totally changed my previous positive and happy demeanour.”

Mr Engler added he was “deeply embarrassed and hurt” by the assault which had affected his creative abilities as a designer.

District Judge Zani said that Feargrieve is unlikely to face a custodial sentence from the incident.

Feargrieve, of Lonsdale Road, London, will be sentenced on January 22 at Westminster Magistrates’ Court.