How did giant ancient crocodiles throw their weight around? 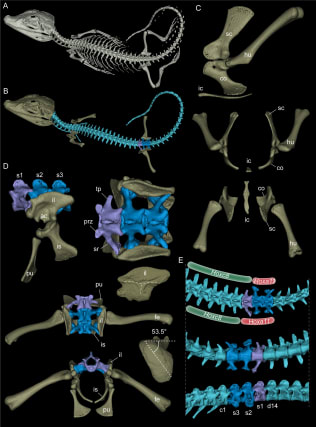 Moving an object that weighs three tonnes and is almost as long as a bus requires specialist equipment.

For one ancient caiman, this meant extra bones in its hip region and more upright shoulders to support its weight.

Purussaurus mirandai was a match for the Asian elephant on the scales, and came in at eight metres long.

It lived six million years ago in what is now Venezuela, and was one of the largest members of the crocodylian group.

The Royal Veterinary College’s (RVC) Professor John Hutchinson joined an international team led by Dr Torsten Scheyer of the Palaeontological Institute and Museum of Zurich to find out more about how the extinct giant carried all that weight.

They found that it had an extra vertebra in its sacrum, and had reoriented its shoulder girdle so it was aligned with the action of gravity.

Researchers suggest the beast’s unusual features indicate that it was not confined to the rivers and swamps of its habitat, but was also able to move on land.

The pre-historic caiman is the only crocodylian to date to have an extra vertebra in its sacrum.

This development requires changes to the “Hox genes” that control where certain body parts are formed.

However, scientists noticed that some living crocodylians suffer malformations that cause an extra vertebra to be created in their sacrum, so it is evident the Hox genes remain available today.

“Our findings are important because they help show how development can be altered in order to enable biomechanical changes as animals evolve into larger body sizes.”

Dr Scheyer added: “We have been extremely lucky to find such a high amount of fossils in the badlands of Venezuela, which allowed the recognition of the unique condition in the hip region of the giant Purussaurus in the first place.

“These old bones show us once again that the morphological variation seen in animals that are long extinct extends well beyond that of what is known in living animals, and thereby broadens our knowledge of what animals can do in evolution.”

The study is published in the online journal eLife.