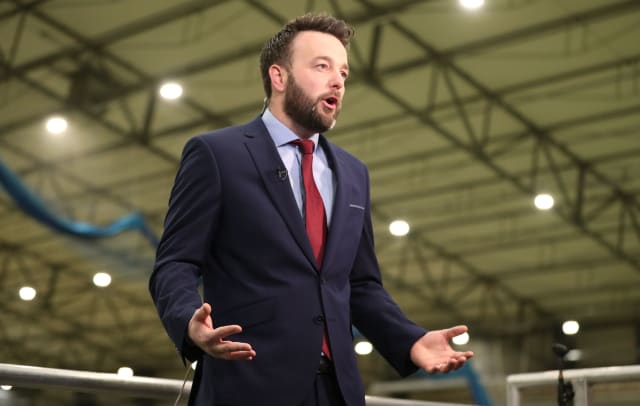 The UK and Irish Governments should publish their draft proposals to revive Stormont if the main parties again fail to strike a deal, the SDLP and Alliance have said.

The two Stormont parties, both basking in successful general election results, insisted the public should be allowed to see what was standing in the way of a return to devolution.

It is understood the governments have been pulling together a draft text of what an agreement to restore the institutions might look like, with the intention of urging the parties to shape it until a deal can be secured.

After meeting with Secretary of State Julian Smith in Belfast, SDLP leader Colum Eastwood, who won the Foyle Westminster seat from Sinn Fein last week, said there was a need for “transparency” in the process.

“If the parties cannot come to an agreement in a couple of days I think then the two governments should put a document in place and force us to either say yes or no and then they should publish that document, because I think what’s been missing in this process is transparency,” he said.

“I genuinely believe if the public could see what is at issue with these talks then they would be furious, because what has been debated over the last couple of years is what you actually call Irish language legislation, and that’s been the height of it.”

Mr Eastwood said the electorate had delivered a message to the politicians that they needed to get back to work.

He added: “The idea we can be off the pitch any longer is just not acceptable any more. I think the public have made it very, very clear. They want Stormont back up and running.”

“It’s not a complete document, it’s not a finished article, I think the next week is about trying to find out what input the parties want to make to it,” she said.

“Just allowing this to drift in talks and more talks has come to an end. My advice to the governments is if they can’t get an agreement round the table then they publish their draft and ask parties to either accept or reject it and let’s decide once and for all and let the public know.”

She referenced a previous break-down in talks last year when the DUP and Sinn Fein traded allegations about whether a draft deal had been agreed in principle before negotiations ended in acrimony.

“No more of this ‘there was a deal, there wasn’t a deal’ nonsense that we’ve had before with things that have fallen apart,” said Ms Long.

“Let people know what was on offer and let people judge whether their elected representatives are actually representing them or not.”

Ms Long, whose party defeated the DUP in the race to win the North Down seat in the election, said parties needed to put the elections behind them.

“We have three working weeks to deliver, so this week can’t be about people sitting around and licking their wounds or preening themselves after last week’s elections,” she said.

“The elections are over, we are now down to the hard graft of getting an Assembly functioning.”

Ulster Unionist leader Steve Aiken, whose party failed to make the inroads it had hoped in the election, said he had raised concerns about the health service during his meeting with Mr Smith.

“The one thing we must see is a responsible and accountable government brought back and one where the challenges of the past are identified and that is going to mean significant changes across the board and if we can’t get reformation in the process we have to ask ourselves what’s the point of bringing it back,” he said.

“If we can’t bring it back by the middle of January we must have proper government in Northern Ireland – if that is direct rule, then it’s direct rule.”

Mr Aiken said it was unlikely a deal would be struck before Christmas.