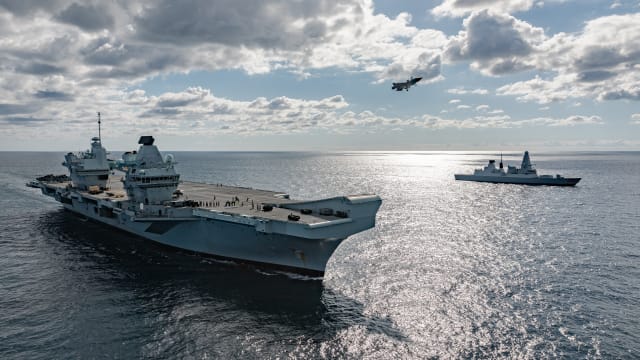 Defence mandarins are bracing themselves for an overhaul of the way they operate, after Boris Johnson’s chief aide Dominic Cummings branded previous major military purchases “a farce”.

Mr Cummings, the brains behind the Vote Leave campaign and a Whitehall critic, used a personal blog in March to accuse the Ministry of Defence (MoD) of squandering “billions of pounds” on warships that were no longer suitable for battle.

In his blog written eight months ago, he said the UK’s two-aircraft carriers, which cost a combined £6.2 billion, could not be used against a “serious enemy”.

Published before he joined the Government, Mr Cummings hit out at the programme to build the carriers. The second of them, HMS Queen Elizabeth, was only commissioned last week.

Calling the scheme a “farce”, he added that MoD procurement specialists had “continued to squander billions of pounds, enriching some of the worst corporate looters and corrupting public life via the revolving door of officials/lobbyists”.

“Scrutiny by our MPs has been contemptible. They have built platforms that already cannot be sent to a serious war against a serious enemy,” wrote Mr Cummings, who is regarded as a key player in the election strategy that produced a victory for Mr Johnson.

He poured scorn on the quality of those overseeing the purchasing process, adding: “The officials in charge of multi-billion processes are mostly mediocre, often appalling. In the MoD corruption adds to the problems.”

The Conservative Party manifesto talked up defence spending, pledging to meet Nato’s target of spending 2% of GDP on defence in order to keep its members safe.

Mr Johnson has said he would go further than that, by increasing the defence budget by “at least 0.5% above inflation every year”.

The manifesto also mentioned the need to “adapt to new threats” – a concern raised by Mr Cummings in his personal blogs – by investing in cyber security and setting up the UK’s first Space Command.

Mr Cummings in March said more money needed to be spent on computing, robotic and artificial intelligence, and argued that drones should be given a more central role in defence.

The comments have reinforced suggestions that, under Mr Johnson and his right-hand man Mr Cummings, there will be a substantial overhaul of Whitehall in a bid to inject fresh investment into northern areas that elected Tory MPs, many of them for the first time, at the General Election.

Mr Cummings, a former adviser at the Department for Education, has written frequently about Whitehall being ill-equipped to deliver the change the country requires.

The Sunday Times reported that the Department for Exiting the European Union (DExEU) would be scrapped as soon as this week, with the best staff to join the Cabinet Office to boost numbers in Britain’s EU negotiating team.

The Foreign Office and the Department for International Development could also be aligned to shift the aid budget’s focus and ensure it aligns with foreign policy goals.

Theresa May also presided over a Whitehall shake-up after being elected Tory leader in 2016.

The former prime minister created the Department for Business, Energy and Industrial Strategy (BEIS) as a behemoth outfit designed to renew Britain’s economy and give support to emerging green industries.

The ex-home secretary also set-up the Brexit department and the international trade department to ready the civil service for Brexit.

It was Gordon Brown in 2008 who initially set up the, currently defunct, Department of Energy and Climate Change which now looks as though it could find a new lease of life under Mr Johnson.