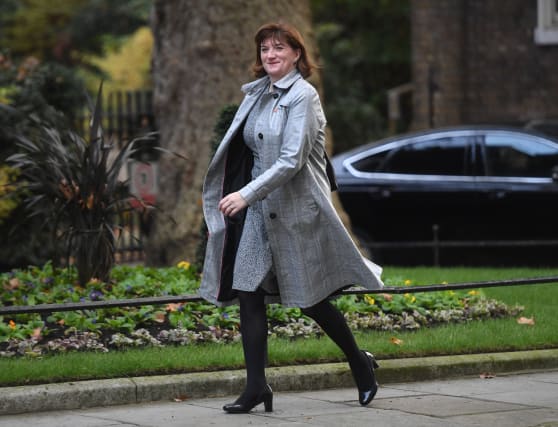 The Digital, Culture, Media and Sport brief is an expansive one, but the secretary at its helm has some experiences of its challenges.

It was announced on Monday evening that Baroness Nicky Morgan had been appointed a life peer, and would be keeping the brief she was handed by Boris Johnson in July.

The Remainer stepped away from the Commons at the General Election after representing Loughborough for almost a decade, telling her constituents that she had made the “very difficult decision” to not commit to another five-year term.

However, despite saying she wanted to “be at home far more”, she continued to cheerlead for the Government throughout the campaign.

At one point, she got into a heated argument with Good Morning Britain presenters Susanna Reid and Piers Morgan, as she attempted to defend the Prime Minister’s claim that they will provide the NHS with 50,000 more nurses.

She was accused of “complete nonsense” by the breakfast TV pair after an admission that 19,000 of those already work for the health service.

Baroness Morgan’s continued appointment comes as questions continue to swirl within the Tory party on what the future of the BBC should look like.

During the election campaign, she said she was “open minded” about the possibility of scrapping the licence fee, and in the same select committee hearing, also said she had “no plans” to review the broadcaster’s decision to stop funding free TV licences for all over 75s.

She has held a number of government jobs, but it was during her two-year stint as education secretary under David Cameron that Baroness Morgan really made her mark.

After making it into the Commons in 2010 at the second attempt, she was quickly earmarked by Mr Cameron as a potential star and was made a ministerial aide within months.

She then held several junior positions, before being appointed education secretary in July 2014, replacing Michael Gove.

But her reign, cut short under Theresa May, was remembered for a failure to adequately address the big issues – the crippling workload, low pay and perceived poor conditions for teachers, while her ill-fated academisation programme was particularly unpopular with teachers, parents and even non-education unions.

It led to strike action across the country, the culmination of teachers and their supporters simply saying “enough is enough”.

Married to architect Jonathan Morgan, with whom she has a son, she was born on October 10 1972 and educated at Surbiton High School and St Hugh’s College, Oxford, where she twice stood unsuccessfully for president of the Oxford University Conservative Association.

While working as a lawyer specialising in mergers and acquisitions, she came within 2,000 votes of causing an upset in Loughborough at the 2005 general election and finished the job in 2010, taking the seat from Labour by a majority of 3,744.