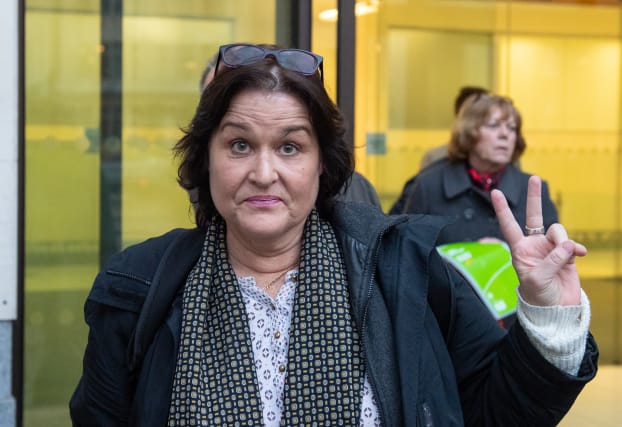 A Brexiteer who repeatedly harassed Anna Soubry before standing against her in the general election has been jailed for 28 days.

Amy Dalla Mura, 56, targeted Ms Soubry between January and March this year, turning up at events and calling her a “traitor” on live television, Westminster Magistrates’ Court heard.

Former MP Ms Soubry, a Remainer who lost her Broxtowe seat while standing for the Independent Group for Change, said she was left “frightened” following the incidents.

Dalla Mura, of Eton Villas, Hove, claimed that her behaviour was politically motivated and did not accept it was frightening, despite standing in the general election in the same constituency as Ms Soubry.

There were shouts of “democracy is dead” and “shame on you” from Dalla Mura and a packed public gallery when Chief Magistrate Emma Arbuthnot gave her sentencing remarks on Monday.

“Ever since the murder of Jo Cox, MPs no longer feel able to put up with sustained intimidation,” she said.

“You showed an obsession and fixation with Ms Soubry which has led you to bullying and intimidating, and harassing, this now-ex MP for Broxtowe.”

“This damages our democracy. Because who wants to put up with this sort of harassment?” she added.

Ahead of the sentencing, Judge Arbuthnot questioned why Dalla Mura had chosen to stand in Broxtowe, Nottinghamshire, just days after Ms Soubry told the trial she feared for her safety following the defendant’s actions.

“It was hard to see how (Dalla Mura) couldn’t have understood it was frightening,” Judge Arbuthnot said.

“Your client then stood against her in Broxtowe. That was the most serious point, that someone had been fixated not with Brexit but with Ms Soubry.

“Most people go and wave flags and shout. They don’t intimidate people right in their faces.”

She added: “Anyone with any sense would say it’s not a good time. I don’t mind standing in Hove but certainly not in Broxtowe.”

Ms Soubry, who became a target for Brexiteers after quitting the Tory party earlier this year, lost her seat to Conservative candidate Darren Henry after coming third in the general election, receiving some 4,668 votes.

Dalla Mura stood for the English Democrats and received 432 votes.

On January 23, Dalla Mura disrupted an event where Ms Soubry was speaking, repeatedly interrupting her and live streaming the event on Facebook.

Dalla Mura had to be escorted from the premises – the Radisson Blu Edwardian Hotel in central London – before the event could continue.

A second incident involved the 56-year-old branding Ms Soubry a “traitor” as she gave a live television interview to BBC’s Newsnight in Parliament’s Central Lobby, while once again using her mobile phone to video her.

The defendant was asked to stop filming in the premises, as it is not permitted, and left after police officers attended.

A week later, on March 22, Dalla Mura tried to intercept the MP outside the Cabinet Office in Westminster saying she wanted to “have a word”, but did not manage to find her.