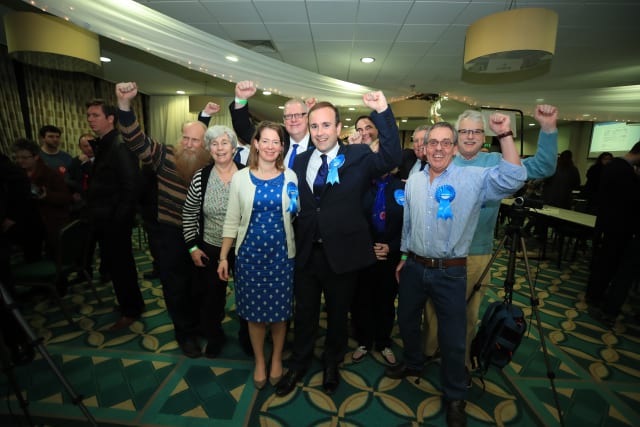 Here are five of the new intake with particularly eye-catching CVs.

Being an MP is not Aaron Bell’s first time in the spotlight – as a serial quizzer, he is used to appearing on TV. Mr Bell appeared on University Challenge in 2001 and became champion of the rebooted Krypton Factor in 2009. He was also part of the Epicureans team which won Only Connect in 2010. Mr Bell continued his winning streak by claiming the Newcastle-under-Lyme constituency for the Conservatives – the first time Labour has relinquished the seat in a century.

Virginia Crosbie, who turned Ynys Mon blue for the first time since the 1970s, has one item that stands out on a varied CV that also includes a microbiology degree, working as a maths teacher and a stint at GlaxoWellcome – she trained dolphins with Animal Planet host Terry Nutkins at Woburn Safari Park. “We would have parties for the children and they would get to meet the dolphins,” she told the Essex Gazette in 2018. “One child actually jumped in before we could stop her but she got out fine.”

Dehenna Davison – whose first name, she says in her Twitter bio, rhymes with Vienna – describes herself as a “muscle car, baseball & fluffy animal enthusiast”. Her brightest moment in the spotlight until her win in the traditional Labour stronghold of Bishop Auckland came last year when she appeared in the Channel 4 programme Bride And Prejudice, which showed the then 24-year-old marrying John Fareham, a Conservative councillor who is 35 years her senior.

Danny Kruger, formerly a speech writer for David Cameron, has been working as an aide to Prime Minister Boris Johnson. He is the son of Great British Bake Off judge Prue Leith. He was with his mother, alongside his wife and sister, when Leith was made a Commander of the British Empire at Windsor Castle in 2010.

Nadia Whittome, a 23-year-old project worker for a social enterprise, became the youngest MP in Parliament after Thursday’s poll when she was elected to represent Nottingham East. She has gained media attention for promising to keep only £35,000 of her MP’s salary, donating the rest to charity. “It’s not berating MPs for taking the full salary,” she told The Independent. “It’s not saying MPs don’t deserve the £79,000. It’s saying workers need a pay rise – carers, teaching assistants, nurses – and I’ll take mine when they take theirs.”