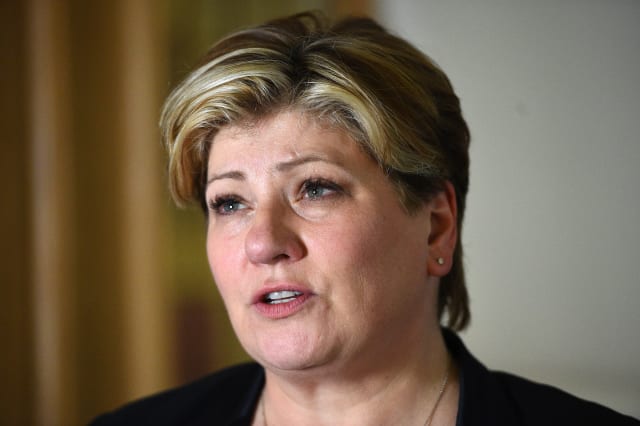 Senior Labour figure Emily Thornberry has accused a party colleague of sharing a "total and utter lie" as infighting broke out amid a race to succeed Jeremy Corbyn as leader.

The shadow foreign secretary, who is believed to be eyeing a shot at taking over the top job from her ally, was accused on Sunday of making a disparaging remark about voters.

Former minister Caroline Flint, who lost her seat in the former stronghold of Don Valley during the catastrophic election for Labour, claimed Ms Thornberry had told a colleague: "I'm glad my constituents aren't as stupid as yours".

Ms Thornberry roundly rejected the allegation as the battle to succeed Mr Corbyn began bringing longstanding tensions within the party to the surface.

"The quote Caroline attributed to me today is a total and utter lie," the Islington South and Finsbury MP tweeted.

"I've never said that to anyone, nor anything like it, nor would I ever think it.

"Whatever our differences, let's not sink into that gutter."

Ms Flint had been highly critical of "ardent Remainers" within the party, citing among them Ms Thornberry and shadow Brexit secretary Sir Keir Starmer, for having "contributed to sacrificing 59 seats" during Thursday's election.

She told Sky's Sophy Ridge On Sunday: "I don't believe anybody who have been the architects of our European policy in the last few years is credible to be leader – I don't think they can win back these seats.

"Keir Starmer led us to a policy that did not listen to Labour leave voices who urged caution, he led us down the path of a second referendum, and I'm afraid Emily Thornberry did as well – she said to one of my colleagues, 'I'm glad my constituents aren't as stupid as yours'."