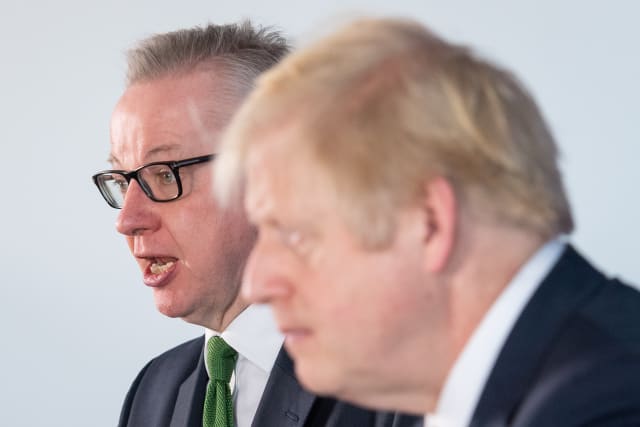 The UK Government has ruled out a second Scottish independence referendum, as Nicola Sturgeon warned Scotland “cannot be imprisoned in the Union against its will”.

Michael Gove said the Tories would “absolutely” not hold another public vote on the matter during the course of the Parliament, regardless of how Scotland votes in the 2021 Holyrood election.

But First Minister Ms Sturgeon insisted the Tories were “raging against reality” by blocking another independence vote and vowed to “pursue the plan I won a mandate for”.

The SNP increased its share of the vote and increased its number of MPs to 47, while the Tories now only have six Scottish MPs – down from 13.

Despite the divide, Mr Gove told Sky’s Sophy Ridge on Sunday: “We were told in 2014 that would be a choice for a generation, we are not going to have an independence referendum on Scotland.”

With the Tories having won Labour voters across the North of England and the Midlands, Mr Gove stressed the need to deliver for its new supporters.

“We need to make sure that economic opportunity is more equally spread across the country,” he said.

The Chancellor of the Duchy of Lancaster also claimed the next phase of Brexit negotiations will be concluded by the end of 2020.

He said: “Quite a lot of the details that we need to negotiate is already laid out in the political declaration, so a lot of work has been done.

“And as a number of people have pointed out, there are areas where the European Union’s interests and the United Kingdom’s interests are already closely aligned, so I’m confident that we will be able not just to leave the EU on January 31 but also to conclude all the details of a new relationship in short order.”

He said he would not get into “speculation” about whether the Withdrawal Agreement Bill will be brought back to the Commons before Christmas, but said it would be voted on in “relatively short order” so it can be passed by January 31.

Ms Sturgeon, who has already made clear her desire to hold a fresh independence vote in the second half of 2020, confirmed that she will “set out this week the detailed, democratic, case for the transfer of power” to Holyrood to allow for a legal referendum to take place.

And she insisted the Tories would not be able to sustain their opposition to such a ballot.

Speaking about Prime Minister Boris Johnson, she told the BBC’s Andrew Marr Show: “If he thinks – and I said this to him on Friday night on the telephone – that saying no is the end of the matter, he is going to find himself completely and utterly wrong.

“It’s a fundamental point of democracy, you cannot hold Scotland in the Union against its will. You cannot just lock us in a cupboard and turn the key and hope that everything goes away.

“If the United Kingdom is to continue, it can only be by consent and if Boris Johnson is confident in the case for the Union he should be confident enough to make that case and allow people to decide.”

Ms Sturgeon stated: “Scotland cannot be imprisoned in the United Kingdom against its will.”

The new clashes on Scotland came as Mr Johnson planned to enshrine in law a commitment to raise spending on the NHS year-on-year when the first Queen’s Speech of the new Parliament is unveiled on Thursday.

No 10 sources said the Prime Minister will use the his legislative programme to underline commitments made during his victorious General Election campaign to support the health service.

It will include a bill to require the Government to honour its pledge to raise spending on the NHS to £33.9 billion by 2023-24.

The Conservatives said it would be the first time any government has made a legally-binding spending commitment over several years.

Meanwhile the Prime Minister’s chief adviser Dominic Cummings was reported to be preparing a radical overhaul of the Civil Service to ensure it delivers on Mr Johnson’s agenda.

According to The Sunday Telegraph, Mr Cummings is planning to review the way officials are hired and fired, while The Sunday Times reported departments could be abolished and civil servants replaced by outside experts.