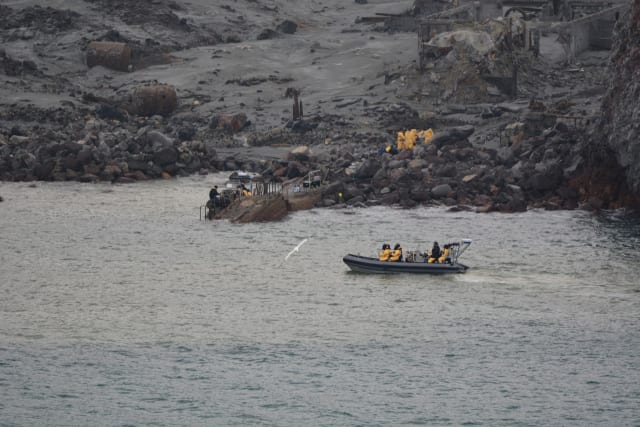 A search has failed to locate the bodies of the last two victims of a volcano eruption in New Zealand last Monday that claimed the lives of at least 15 people, most of whom were tourists.

Two four-person teams landed on the volcanic White Island by helicopter early on Sunday and searched a location thought to be where one of the bodies might be.

The teams were wearing heavy protective clothing due to the toxic air and gases present on the island as a result of the eruption.

Their breathing apparatus allowed them to search for only 75 minutes.

The searchers were unable to locate either body and returned to the mainland where they underwent decontamination.

“We have always anticipated recovering all bodies from the island, and we remain deeply committed to that goal, to allow families some closure,” he said.

“We are now debriefing, reassessing and coming up with a new plan going forward.”

Mr Tims said the process of identifying victims and releasing bodies to their loved ones was ongoing in Auckland, New Zealand’s largest city.

“We will continue to release the names of those who have died as soon as we are able to,” he said.

Five victims have so far been named, four of whom are Australians.

The first to be named was Krystal Browitt, a veterinary nursing student from Melbourne, Australia, who turned 21 on November 29.

On Sunday, Zoe Hosking, 15, and her stepfather Gavin Dallow, 53, both from Adelaide, were confirmed as dead. Lisa Dallow, Zoe’s mother, is being treated for severe burns.

Anthony Langford, 51, of Sydney, has also been confirmed dead. He was travelling with his wife Kristine Langford and their children Jesse, 19, and Winona, 17.

Jesse survived the eruption and was identified in a New Zealand hospital on Tuesday evening. His mother and sister are still unaccounted for.

Two British women were among those admitted to hospital in New Zealand after the volcano erupted.

All 13 Australians who suffered burns have been transported to hospitals around Australia for treatment, at least eight of whom are reported to be in a critical condition.

Navy and police divers are expected to resume the search of waters around the island later on Sunday.