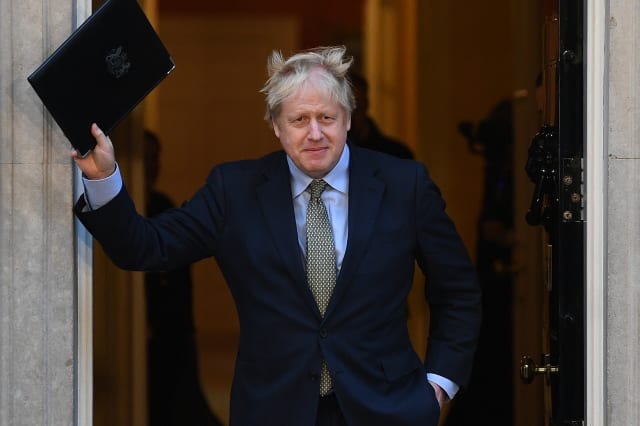 The Conservatives’ 59-page manifesto contained what Boris Johnson hoped was enough to secure him a “working” majority.

It might have been criticised for being slim on ambition by the Institute for Fiscal Studies but the public were buying up his pledges in large numbers.

In the end, he won a “stonking mandate” – an 80-seat majority which means he can now turn his attention to finalising Britain’s exit from the European Union and putting into action a host of his domestic promises.

Here is a look at what is at the top of his Downing Street in-tray.

Mr Johnson and his team correctly predicted that Brexit, for both people who voted for it and those who simply want it over with, would be the central issue of the election.

In his speech in Downing Street on Friday, Mr Johnson said he wanted to give voters a “permanent break from talking about Brexit”.

That mission will start next week when he is expected to bring his Brexit Bill back to the Commons as he seeks to ratify the UK’s divorce from Brussels by the January 31 deadline.

Once that is over the line, trade talks will begin in earnest with only an 11-month buffer between the end of the transition period and a possible no-deal outcome.

The state of the NHS and the alleged threats to its future under Mr Johnson’s premiership were brought up on a daily basis by Labour during the campaign – but it is he who will be responsible for its prosperity for the next five years.

The former London mayor, in his victory speech, said he heard “loud and clear” that the country wanted his focus to be on the NHS – “that beautiful idea that represents the best of our country” – and that he would seek to deliver improvements.

He has promised more money, 31,000 new nurses, 40 extra hospitals over the next decade and 50 million more GP appointments.

His pledges will all be required, especially after, on day one of his new term, the PM was handed news of the worst A&E waiting times on record.

The very reason Mr Johnson is back in Downing Street is because he convinced thousands of traditional Labour voters in places like the North East and the Midlands to lend him their vote.

Places like Bishop Auckland had never elected a Tory MP before and other Leave-voting areas such as Great Grimsby had not gone blue since the Second World War.

These communities come with very different priorities and concerns to the usual cohort of Tory-voting areas and Mr Johnson will have to strike a balance if he is to keep all 365 of his MPs on-side.

– Scotland and the SNP

It was telling that Mr Johnson wasted no time in phoning SNP leader Nicola Sturgeon, who was celebrating her own swathe of gains north of the border.

Scotland’s First Minister, following her party’s 48 seat haul, confirmed she will formally request the powers for Holyrood to hold a second independence ballot.

But her Conservative counterpart told her in no uncertain terms that he “remained opposed to a second independence referendum”, according to Downing Street.

That answer is unlikely to satisfy SNP MPs returning to Westminster on Tuesday, meaning Mr Johnson will need to find a way of appeasing Scottish voters on the issue – or relent, like his predecessor David Cameron did.

Mr Johnson has hardly been effusive about the merits of the high-speed rail line that intends to eventually link London, Birmingham, Manchester, Leeds, Edinburgh and Glasgow.

He will have to think carefully about whether he wants to cancel Europe’s largest infrastructure project – or whether the £88 billion route and capacity upgrade is what voters in his converted constituencies of the Midlands and North are after.

The ex-foreign secretary made a big play when taking over from Theresa May about being “Minister for the Union”, as well as PM.

He would have looked with worry, in that case, at the DUP losing seats to Sinn Fein at the General Election and the continued dormancy of the Northern Ireland Assembly.

Number 10 said Mr Johnson told Irish Prime Minister Leo Varadkar on Friday that he would make it his “top priority” to get Stormont up and running again.

Given Stormont’s approval has a key role to play in Mr Johnson’s Withdrawal Agreement, the clock is well and truly ticking when it comes to delivering on that vow.