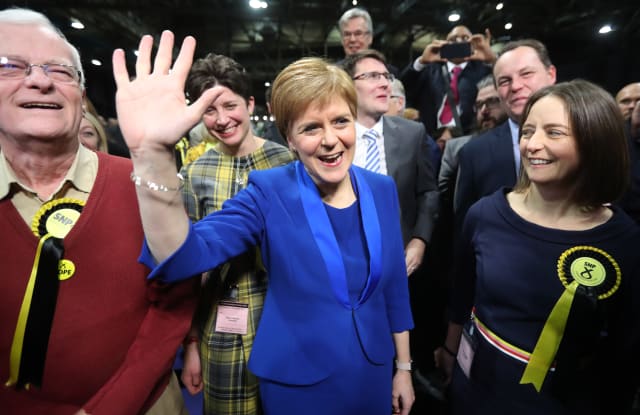 Nicola Sturgeon is set for a showdown with Prime Minister Boris Johnson as she insisted the SNP’s election success gives her a “renewed, refreshed and strengthened” mandate for a second vote on Scottish independence.

The First Minister’s SNP made a series of gains north of the border, including ousting Liberal Democrat leader Jo Swinson.

Ms Sturgeon said it had been an “exceptionally good night” for her party, with the results leaving Scotland and the rest of the UK on “divergent paths”.

The SNP won 47 MPs, up from the 35 they won two years ago, making it the party’s second best Westminster result ever.

While the Tories made gains south of the border – with Mr Johnson winning the majority he was seeking to push ahead with Brexit – in Scotland it was a different story.

There are now six Tory MPs in Scotland, down from 13 in 2017, though Scottish Secretary Alister Jack was one of those who held on.

Labour had another disastrous election, with the party again left with just one MP in Scotland.

As in 2015, Ian Murray was left as a sole Scottish Labour representative in the House of Commons – using his speech after winning Edinburgh South to insist the party must now change or it will “die”.

Neale Hanvey, who was suspended by the SNP amid allegations of anti-Semitism, defeated shadow Scottish secretary Lesley Laird in Kirkcaldy and Cowdenbeath.

Although Ms Swinson lost her East Dunbantonshire constituency, her party ended up with four MPs in Scotland – the same number as it won in 2017 – after it gained North East Fife from the SNP.

Former Scottish justice secretary Kenny MacAskill made a return to front-line politics after winning the East Lothian seat from Labour.

SNP MEP Alyn Smith captured the Stirling constituency from the Conservatives, while gains from Labour in Glasgow meant Ms Sturgeon’s party won all seven of the constituencies in Scotland’s largest city.

The SNP polled 45% of the vote in Scotland, an increase of just over eight points, while both the Tories and Labour saw their vote decline, to 25.1% and 18.6% respectively.

But Ms Sturgeon said results across the UK were “pretty grim”, after Mr Johnson was returned to Downing Street with a majority.

The Tory campaign in Scotland had focused squarely on preventing a second vote on independence – while the SNP had based their campaign on stopping Brexit and pursuing a fresh independence referendum.

“And I have a mandate, a renewed, refreshed, strengthened mandate, to offer people in Scotland the choice of a different future.

“It is then up to people in Scotland what choice they make.

“I don’t pretend everybody who voted SNP yesterday will necessarily support independence, but there is a clear endorsement Scotland should get to decide our future and not have it decided for us.”

The First Minister will write to the Prime Minister before Christmas to formally demand Holyrood be given the power to hold a second vote on independence.

While Boris Johnson has previously made clear he will block such a ballot, Ms Sturgeon said the Tories must “reflect very carefully” on the result of the election.

“They have to recognise democracy. Scotland can’t be kept in the UK against its will. It can only do that by consent, therefore Scotland has to have the ability to decide that question.

“Then it is up to the people of Scotland what decision they make.”

However Mr Jack was adamant the PM should continue to block Ms Sturgeon’s calls for a section 30 order – which would grant Holyrood the power to hold an independence ballot.

He described the election results as being “bittersweet”, saying: “The sweetness is going back with a majority and not into a hung parliament – I’m delighted about that – but it is sad to be leaving colleagues behind.”