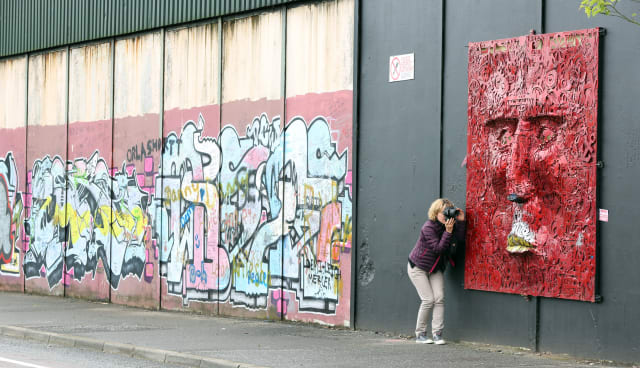 A distinctive peace wall artwork which was stolen from Belfast has been recovered by police.

The red 8ft by 8ft sculpture, which features a face, had previously been on one of the longest barriers which separates the unionist Shankill area of the city from the nationalist Falls area.

It disappeared from the Merkland Place area where it was being stored ahead of being put back at the peace wall.

A Police Service of Northern Ireland (PSNI) officer said it was found thanks to a tip-off from a member of the public.

Constable Kiera Whoriskey said an investigation into the theft was still ongoing.

“The metal sculpture, designed and made by a group of local people, and normally fixed to the peace wall on Cupar Way, was reported stolen on December 9,” she said.

“The artwork went missing  from outside commercial premises in the Merkland Place area, some time between November 21 and December 5.

“While the 8ft by 8ft sculpture has now been recovered by the owner, we are still investigating the theft.

“I am appealing to anyone with any information or witnessed anything suspicious in the area of the theft, or in the area of Divis Road close to the Divis and Black Mountain car park, to contact police on 101, quoting reference number 965 of 9/12/19.”