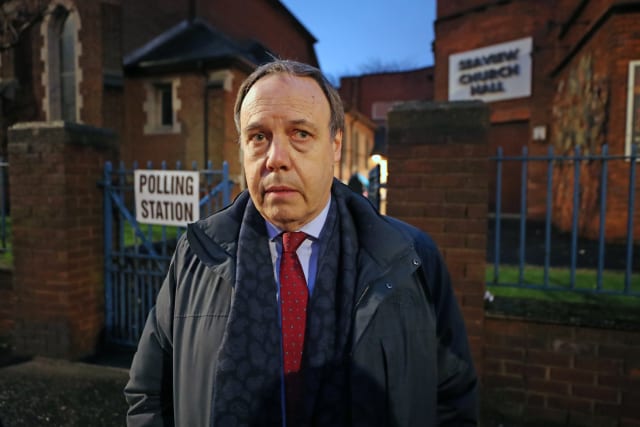 Nigel Dodds relished his role as the DUP’s leader in the House of Commons.

He has been North Belfast’s MP since 2001 after he took the seat from Cecil Walker, which was seen as a massive blow to the Ulster Unionist Party.

He was part of the DUP’s surge when they obliterated the Ulster Unionists in the challenge.

Mr Dodds has been a key strategist within the DUP, particularly after he took up the party’s reins in Westminster in 2010.

The father-of-two, who is married to MEP Diane Dodds, is a barrister and trained at St John’s College, Cambridge.

Mr Dodds has been subjected to numerous attacks over the years. In December 1996, the IRA attempted to kill him.

An RUC officer was injured when the gunmen fired at police guarding Mr Dodds when he was visiting his seriously ill son at the Royal Children’s Hospital in west Belfast.

Mr Dodds’ constituency office was also targeted by the Continuity IRA in 2003 when a viable improvised explosive device was left outside the office.

The bomb was defused by the British Army.

He was also rushed to hospital in 2013 after he was struck in the head with a brick when violence erupted in North Belfast.

He was knocked unconscious for some 10 minutes and was treated in Belfast’s Royal Victoria Hospital.

It also emerged in 2007 that Mr Dodds claimed the most expenses compared to the rest of Northern Ireland’s MPs.

Mr Dodds was described as the “architect of Brexit” by Sinn Fein’s Michelle O’Neill as she campaigned for his constituency rival, John Finuncane.

Tragedy hit the Dodds family when his nine-year-old son Andrew died after a long illness in 1998.

Andrew Dodds had been suffering from spina bifida and hydrocephalus.

Mr Dodds has described his son as a “bright and cheerful boy”.

“The lives of those who came into contact with him were enriched, and our lives were certainly enriched by having him,” he previously said.