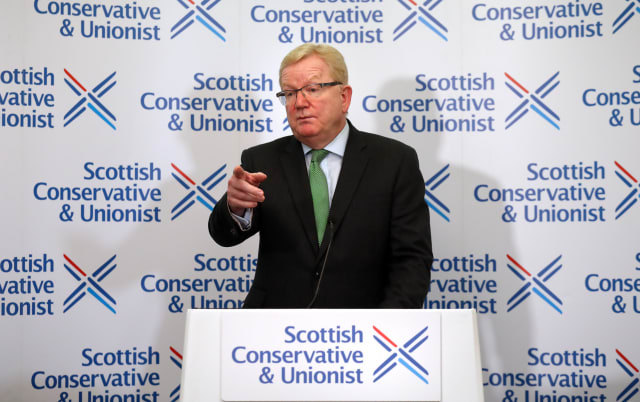 The Scottish Conservatives will not support any request for a second independence referendum, Jackson Carlaw has said.

First Minister Nicola Sturgeon has said Scotland now has a democratic right to a second vote on the issue and confirmed she will formally request the powers for Holyrood to hold a ballot.

Scottish Tory leader Mr Carlaw said her plan would take the country back to “more division and chaos” and the Tories would not support a second independence referendum until a generation had passed.

Speaking at a press conference in Glasgow, he said it was “a disappointment” the number of Tory MPs north of the border has dropped from 13 to six but insisted the party had cemented its position as the main opposition to the SNP north of the border.

He said he is confident Prime Minister Boris Johnson will work on a “unifying agenda” that will “put strengthening the union at its heart”.

“Of course, up until 10pm last night, that was not the story told by the SNP. It was, they said, about stopping Brexit.

“Nonetheless, the SNP has reverted to form and decided to take every vote it won yesterday as a free pass for a referendum next year.

“I am clear – Nicola Sturgeon’s plan would take us back to more division and chaos.”

He added: “What we will not be supporting is any request for a second independence referendum.

“We clearly will not now be fighting any second Brexit referendum.

“I think we will see the chaos of Brexit in the way that it paralysed Westminster fall behind us and there will be now an opportunity for the United Kingdom Government to get on with our exit from the European Union and also to get on with running the country in a way which I think will help the Scottish Conservatives in the campaign that we fight in 2021.”

He stressed: “Until a generation has passed, Scottish Conservatives will not support a second independence referendum campaign.”

While the Tories made gains south of the border – with Mr Johnson winning the majority he was seeking to push ahead with Brexit – in Scotland it was a different story.

Scottish Secretary Alister Jack was one of the six Conservative MPs who held on to their seats.

Mr Carlaw said: “There is, of course, no way of getting round the fact that going from 13 to six MPs in Scotland is a disappointment to us.

“But the numbers show that – having made our breakthrough in 2016 and 2017 – we have now cemented our position as Scotland’s main opposition party to the SNP.

“Winning nearly 700,000 votes across the country is a fantastic achievement.”

He added: “Unlike Labour, we have largely maintained our share of the vote – with our second best showing since 1992.

“And most importantly of all, we will now be part of a majority Conservative Government at Westminster – this is good news for Scotland.

“It means that the gridlock and paralysis we have seen at Westminster over the last three years can finally come to an end.”