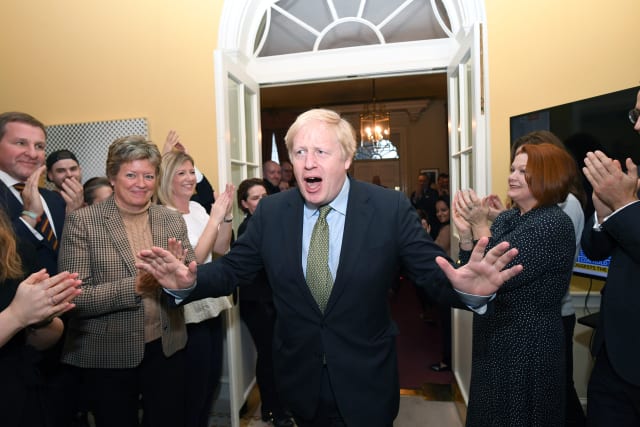 A triumphant Boris Johnson declared he has “smashed the roadblock” over Brexit as he scored a crushing General Election victory over Labour.

On a dramatic night, the Prime Minister was returned to Number 10 with the biggest Conservative majority since Margaret Thatcher in the 1980s.

The result plunged Labour into turmoil, with Jeremy Corbyn announcing he would not take the party into the next general election after seeing a string of former strongholds fall to the Tories.

But Mr Corbyn faced furious demands to quit immediately after he said he intended to lead the party through a “process of reflection” as it considered the way forward.

Meanwhile Mr Johnson was faced with the prospect of an almost immediate constitutional showdown as Nicola Sturgeon demanded the right to hold a fresh referendum on Scottish independence.

After the SNP took 48 of the 59 seats in Scotland, the First Minister said she would next week set out a “detailed democratic case” for a transfer of power to Holyrood to enable a referendum to be put “beyond legal challenge”.

The election night saw some high-profile casualties, with Liberal Democrat leader Jo Swinson stepping down after losing her Dunbartonshire East seat to the SNP, while DUP deputy leader Nigel Dodds was ousted by Sinn Fein in North Belfast.

With almost all the 650 results declared, the Conservatives appeared to be on course for a majority of 76 as Labour’s hitherto impregnable “red wall” collapsed, with seats falling across the North and Midlands.

In a victory rally in Westminster, Mr Johnson acknowledged his victory had been made possible by voters who had never before backed the Tories.

He said that he was “humbled” that they had chosen to put their trust in him and vowed not to let them down.

“In winning this election, we have won votes and the trust of people who have never voted Conservative before and people have always voted for other parties,” he said.

The Prime Minister is now expected to reintroduce his Brexit deal in the Commons next week following the Queen’s Speech and State Opening of Parliament on Thursday.

He blamed the party’s losses on Labour Leave voters turning to the Conservatives or the Brexit Party.

“This election was ultimately taken over by Brexit,” Mr Corbyn said.

“My whole strategy was to reach out beyond the Brexit divide to try and bring people together.”

He said that it would now be for the party’s ruling national executive to set the timetable for a leadership contest, some time in the early part of 2020.

“I am quite prepared, and I was elected to do so, to lead the party until that takes place,” Mr Corbyn said.

His comments infuriated some Labour MPs and defeated candidates who said he should go immediately.

Veteran MP Dame Margaret Hodge said Labour had become the “nasty party”, with anti-Semitism allowed to flourish, and that the result represented a rejection of the entire Corbyn “project”.

“People just didn’t trust the economics, the confetti of promises that was thrown at the public without any clear and honest way they were going to be paid for,” she told the BBC.

“Labour has become the nasty party. I am one of the victims of that with the anti-Semitism.”