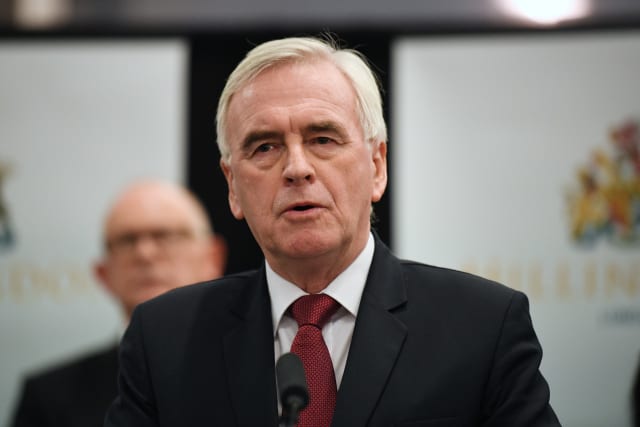 Police had to intervene as a scuffle broke out moments after Labour shadow chancellor John McDonnell's re-election was confirmed.

Footage from the Hayes and Harlington count, in Uxbridge, West London, showed angry exchanges between a handful of people.

Cries of "liar" and "terrorist" rang out as Mr McDonnell was giving his acceptance speech.

Police had to intervene to deal with the disturbance.

John McDonnell
Britain'sShadow Chancellor of the Exchequer John McDonnell speaks during the Labour Party's annual conference at the Arena and Convention Centre (ACC), in Liverpool, England, Monday, Sept. 24, 2018. Britain's main opposition party took a step at its annual conference toward backing a new referendum on Brexit — but stopped short of saying the vote should include an option not to leave the European Union at all. (Peter Byrne/PA via AP)
Britain's main opposition Labour Party leader Jeremy Corbyn, foreground, and Shadow Chancellor of the Exchequer John McDonnell, left, during the Labour Party's annual conference in Liverpool, England, Monday Sept.24, 2018. Delegates at the party's annual conference in Liverpool will consider party policies. (Peter Byrne/PA via AP)
MP John McDonnell, Shadow Chancellor speaks ahead of the Grenfell fire one year anniversary solidarity march organised by Justice4Grenfell and the Fire Brigade's Union, in Westminster in London, Saturday, June 16, 2018. A year ago, London's Grenfell Tower high-rise was destroyed by a fire that killed 72 people. It was Britain's greatest loss of life by fire since World War II. (AP Photo/Kirsty Wigglesworth)
Britain's Labour Party leader Jeremy Corbyn, centre, and shadow Chancellor of the Exchequer, John McDonnell, attend a rally in Brighton, southern England, ahead of Labour Party's annual conference, Saturday Sept. 23, 2017. (Stefan Rousseau/PA via AP)
From left to right politician John McDonnell, Leader of Britain's Labour Party, Jeremy Corbyn, director Ken Loach and screenwriter Paul Laverty, pose for photographers upon arrival at the premiere of the film 'I, Daniel Blake', at a central London, Tuesday, Oct. 18, 2016. (Photo by Joel Ryan/Invision/AP)
John McDonnell, British Labour MP, speaks to the media outside the Palace of Westminster, Friday July 14, 2006 to announce his challenge for the Party Leadership. The leftist Labour Party legislator on Friday declared his candidacy to succeed Prime Minister Tony Blair, calling for the party to take a turn to the left. John McDonnell, 54, chairman of the Socialist Campaign Group, said he saw no difference between Blair's policies and those of Treasury Chief Gordon Brown, who is expected to become the party's next leader. (AP photo/Alastair Grant)
Shadow Chancellor John McDonnell speaks with the media during an event at the Millennium Hotel in Glasgow, where he pledged to deliver the "biggest transfer in wealth and power" from London to Scotland for more than seven decades if Labour wins power in the next general election.
Shadow chancellor John McDonnell makes a speech at Savoy Place in London where he shows his scars after a fall.
Jeremy Corbyn, with members of the shadow cabinet including Diane Abbott, Richard Burgon, Emily Thornbury, Rebecca Long-Bailey, John McDonnell and Keir Starmer, arriving for his speech during the Labour Party annual conference at the Arena and Convention Centre (ACC), in Liverpool. Picture date: Wednesday September 26th, 2018. Photo credit should read: Matt Crossick/ EMPICS Entertainment.
A Labour supporter wears a T-shirt bearing the face of Shadow Chancellor John McDonnell during an event in the University of Bradford to launch the party's manifesto
A Labour supporter takes a selfie with John McDonnell ahead of Jeremy Corbyn's first keynote in Westminster to begin the election campaign ahead of the snap election announced this week by PM Theresa May on June 8. Picture dated: Thursday April 20, 2017. Photo credit should read: Isabel Infantes / EMPICS Entertainment.
Shadow chancellor John McDonnell MP salutes as he sings The Red Flag, after Jeremy Corbyn's speech on the fourth day of the Labour Party conference in Liverpool. Picture date: Wednesday September 28, 2016. Photo credit should read: Matt Crossick/ EMPICS Entertainment.
Shadow Chancellor of the Exchequer John McDonnell visits Make Liverpool, an open access business unit that allows small start up companies to rent space and use equipment to help their businesses grow.
Shadow chancellor John McDonnell joins members of London's LGBTI community, as they hold a vigil in Old Compton Street, Soho, in solidarity with the people of Orlando, after the shooting there in a gay nightclub, Pulse, in the early hours of Sunday morning.
Up Next

In his victory speech, the Labour veteran said: "It is quite clear that there are fears also now for our democracy and the rise of the extreme right.

"But I say now we will organise and we will ensure this type of democracy will reign, and the democratic wishes of our people will be respected, and this sort of extreme right wing violence will not be tolerated within our society."

Several people with lanyards on had to be pulled apart, with bystanders capturing the incident on mobile phones.

Speaking afterwards, Mr McDonnell told PA: "I'm worried about the nature of the extremist politics that's developing in this country and we have to be careful for that.

"And we have to be careful in the way individual politicians speak that may enable that to happen, and I caution the Prime Minister to that effect."